THE first FIFA World Cup™ was one of a kind. Taking place wholly in the Uruguayan capital of Montevideo, the sport's inaugural showpiece was rich in details that might bemuse the modern football fan: four teams arriving together on the same boat, an unfinished stadium, even a one-armed goalscorer in the Final. Yet it ended with a familiar outpouring of joy as the whole of Uruguay took a public holiday after the Celeste became the first world championsby defeating neighbours Argentina 4-2.

The maiden tournament had been some years in the offing. FIFA, at its founding meeting in 1904, declared that it alone had the right to organise an international championship, yet only in the 1920s did the idea gather support. The 1924 Olympic football tournament in Paris proved hugely popular, with over 40,000 spectators watching Uruguay beat Switzerland in the final. Yet when the British associations, with their professional leagues, declined to participate in that event after a row over players' amateur status, it was evident the time was ripe for a separate international football competition.

A 1927 FIFA commission examined the possibility and on the eve of the following year's Amsterdam Olympics, FIFA's Congress voted to stage an inaugural world championship in 1930. The only remaining question was where. Italy, Netherlands, Spain, Sweden and Uruguay all expressed an interest but the Uruguayans alone were prepared to pay all travel and hotel expenses as well as build a new stadium at a time of economic uncertainty. Add the fact Uruguay would be celebrating its centenary that same year and FIFA duly plumped for the South Americans, confirming their decision at the 1929 Congress in Barcelona.

Finding the teams to take part was the next challenge. Seven signed up from the home continent along with Mexico and the United States. But two months before the start, there was still no European entrant. The prospect of two months away was an obvious deterrent for players with jobs at home but France and Belgium – the only two FIFA founder members to participate – eventually agreed to undertake the long journey together with Yugoslavia and Romania.

Boat journey
Besides the Yugoslavia party, sailing independently on the MS Florida, the remaining European contenders travelled together on the SS Conte Verde, departing from Barcelona on 22 June. Also embarking on one of football's most significant journeys were FIFA President Jules Rimet with the Goddess of Victory trophy – a statuette 30cm high and weighing 4kg designed by Frenchman Abel Lafleur – and John Langenus, the Belgian who would referee the Final. The Conte Verde stopped at Rio to pick up the Brazil squad and then at Santos where players bought bananas, oranges and pineapples. Finally, on 4 July, the liner arrived at Montevideo where it was greeted by 10,000 Uruguayans. 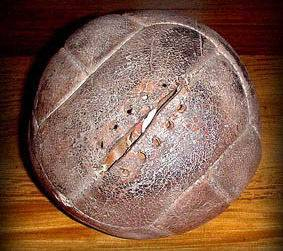 Only now, with the 13 sides in situ, did the draw take place but if the players were ready, the showcase stadium, the Estadio Centenario, was not. Work had begun on the vast, bowl-like arena less than a year earlier, on 21 July 1929. Construction went on 24 hours a day under the supervision of architect Juan Antonio Scasso yet heavy rain had hindered progress and it was not until five days into the tournament that the Centenario hosted its inaugural match, a 1-0 win for Uruguay over Peru.

The Pocitos and Parque Central stadiums elsewhere in Montevideo had hosted the earlier fixtures, the former staging the first-ever FIFA World Cup game between France and Mexico on 13 July. There were flurries of snow on the day Lucient Laurent wrote his name in the record books with the competition's opening goal 19 minutes into an eventual 4-1 victory for Les Bleus. 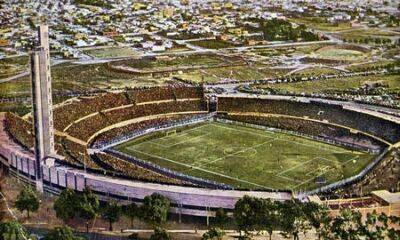 The FIFA World Cup's first major controversy provided a footnote to France's defeat in their second game against Argentina two days later. Trailing to a free-kick by Argentine enforcer Luisito Monti, the French were denied the opportunity of an equaliser when referee Almeida Rego halted Marcel Langiller's run on goal by sounding the final whistle. Unfortunately, there were actually six minutes remaining, prompting chaotic scenes that only ended when the Brazilian official brought the teams back on to the pitch to conclude the contest.

Stabile steps up
Argentina then benefited from Manuel Ferreira's decision to drop out of their second match against Mexico because of a university exam. In came Guillermo Stabile whose treble in a 6-3 success proved just the start for the eventual eight-goal top scorer, nicknamed 'El Filtrador'. Stabile was 24 hours too late to record the tournament's first hat-trick, however, that honour befalling Bert Patenaude, who hit all of the United States' goals in a 3-0 win over Paraguay.

Both seeded, Argentina and the US went on to meet in the semi-finals after topping their respective groups but it proved a one-sided encounter, Stabile netting twice in a 6-1 stroll against opponents who lost defender Raphael Tracey to a broken leg. Argentina's opponents in the first Final would be Uruguay, their conquerors in the Olympic final two years earlier.

The winning goal then had come from forward Hector Scarone and his understanding with midfielder Jose Andrade – who stood out for his clever passing and reading of the game – remained a prominent feature of their play, along with the solid defensive base provided by Jose Nasazzi and Ernesto Mascheroni. After victories over Peru and Romania, Uruguay ran out 6-1 semi-final winners against Yugoslavia, Pedro Cea claiming a hat-trick against opponents who had eliminated the other seeds, Brazil.

An estimated 30,000 Argentines crossed the River Plate for the Final on 30 July 1930. The gates of the Estadio Centenario opened in the early morning and by kick-off, 80,000 spectators had crammed inside. Argentina won the toss for their choice of match ball and, despite losing an early goal to the beret-wearing Pablo Dorado, they had the better of the first period, attacking with speed and intelligence and earning their reward with goals from Carlos Peucelle and Stabile.

A newspaper report the next day recounted how the home players and their supporters had "suffered a thousand deaths" yet roused by their captain's half-time team talk, the Celeste responded. Cea and Victoriano Santos Iriarte restored the hosts' lead before Hector Castro, who had lost an arm in a boyhood accident, removed any doubt with a minute remaining. Uruguay's players cried tears of joy as Nasazzi became the first man to hold aloft football's most prestigious prize. The FIFA World Cup was up and running.