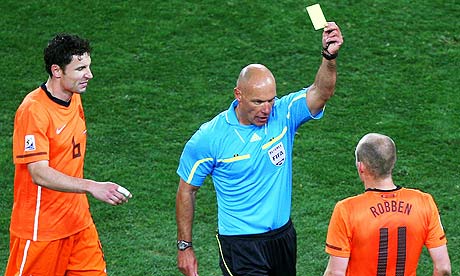 Howard Webb has admitted that his dream of refereeing a World Cup final was soured by the conduct of the players in Johannesburg.

Holland and Spain accrued 14 yellow and one red card between them as Webb and his assistants, Darren Cann and Mike Mullarkey, struggled to stem the flow of fouls and dissent.

The English team of officials were later targeted for criticism by the Holland coach Bert van Marwijk after the final whistle while Sepp Blatter, the Fifa president, offered Webb only lukewarm support.

"I felt a bit like a bride who'd seen three gorgeous sunny Saturdays and then, on her wedding day, she comes out of church and it's raining," Webb said.

"It was probably the most difficulty game I've ever had – and I've had some hard ones. The fact it was the World Cup final, which has its own incredible level of scrutiny, just added to the difficulty we faced."

Webb was nevertheless happy with his and his assistants's performance. "Having watched it back there's not a lot I would change. I'm satisfied that under difficult circumstances we did a pretty efficient job," he said.