Goal-line technology will not be on the agenda when football's lawmakers meet in Wales on Wednesday, contrary to indications by Fifa president Sepp Blatter. 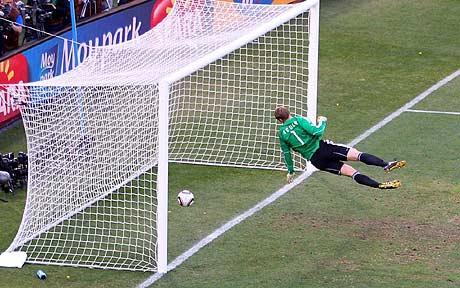 What a howler: Frank Lampard's 'goal' against Germany didn't count

The technical subcommittee of the International Football Association Board will meet in Cardiff but, as planned in May, there will be only one item on the agenda and that will be the continuing experiment with additional assistant referees.

Blatter announced during the World Cup finals that goal-line technology had to be discussed again at the "first opportunity" and indicated that it would be this month.

However, it is not now expected to be on the agenda until a more formal meeting in October.

A Fifa spokesman said: "The meeting this week is purely to ratify any requests that have come forward over the implementation of the assistant referees experiment, which was used last year in the Europa League.

"The first formal meeting where that discussion [goal-line technology] could take place is in October ."

The meeting will instead concentrate on the member associations who have taken up the opportunity to use additional assistant referees after IFAB agreed in May to launch a two-year experiment to test the effectiveness of the initiative.

IFAB, which comprises representatives from Fifa and the four home nations, rejected the notion of goal-line technology in March on the grounds of cost and possible disruption.

However, calls for the introduction of technology intensified after England's Frank Lampard was denied what would have been an equaliser in the World Cup second-round clash with Germany when his shot rebounded off the underside of the crossbar and dropped over the line, but unseen by the match officials, and was not given.

Speaking in Johannesburg last month, Blatter said: "It is obvious that after the experience so far in this World Cup, it would be a nonsense to not reopen the file of technology at the business meeting of the International FA Board in July."

Meanwhile Fifa have kicked off a two-month tour to inspect nine candidates vying to host the 2018 or 2022 World Cups, the first stop coming in Japan.

A five-member team have arrived in Osaka on a four-day trip to see stadiums, facilities and presentations, there and in Tokyo.

They will go on to South Korea, Australia, Holland and Belgium, Russia, England, Spain and Portugal, the United States and Qatar and draw up feasibility reports. The visit to England is scheduled for Aug 23-26. Fifa's 24 executives will choose the winners in Zurich on Dec 2.

Immediately after arriving in Japan, the team, led by Chile's Harold Mayne-Nicholls, took a helicopter to inspect the site in Osaka for an 83,000-seat stadium which would host the opening match and final.