Mahmoud Ahmadinejad, the Iranian leader, says Paul the Octopus, the sea creature that correctly predicted the outcome of World Cup games, is a symbol of all that is wrong with the western world. 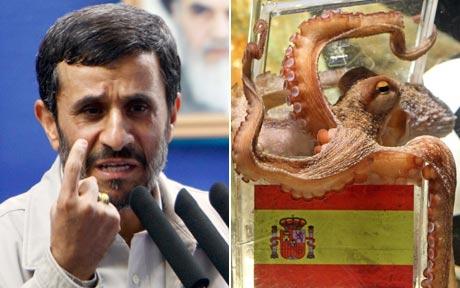 He claims that the octopus is a symbol of decadence and decay among "his enemies".

Paul, who lives at the Oberhausen Sea Life Centre, in Germany, won the hearts of the Spanish by predicting their World Cup victory.

He became an international star after predicting the outcome of all seven German World Cup matches accurately.

However, the Iranian president accused the octopus of spreading "western propaganda and superstition." Paul was mentioned by Mr Ahmadinejad on various occasions during a speech in Tehran at the weekend.

"Those who believe in this type of thing cannot be the leaders of the global nations that aspire, like Iran, to human perfection, basing themselves in the love of all sacred values," he said.