The home of Jules Rimet, the father of the FIFA World Cup™, France finally claimed the crown for itself in the summer of 1998. If an unforgettable summer for the new champions – who had tasted semi-final defeat twice a decade before – it was also a memorable one for the old tournament which was now bigger than ever before. 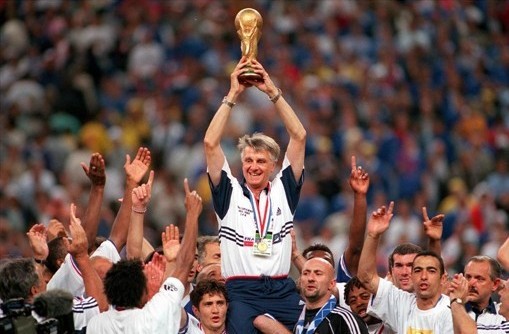 The 16th FIFA World Cup comprised 32 teams for the first time. The greater number of qualifying places meant more opportunities for teams from Africa, Asia and CONCACAF – in this case, first-time qualifiers South Africa, Japan and Jamaica. The eight groups of four were spread out across France but the venue for the Opening Match and Final was the showpiece Stade de France just north of Paris. It was there that holders Brazil kicked off the tournament with a 2-1 victory over Scotland, achieved thanks to Tom Boyd's own goal.

The great surprise of the first round was the failure of Spain, who paid for a poor start in Group D. After losing 3-2 to Nigeria and drawing with Paraguay, Javier Clemente's side put six past Bulgaria but the grandstand finish proved in vain. Paraguay beat group winners Nigeria on the same night and qualified at Spain's expense.

Elsewhere, Romania finished top of Group G ahead of England and Colombia and celebrated with peroxide crops – a touch premature given their exit in the next round. In Group A, Kjetil Rekdal's last-minute penalty secured Norway victory over Brazil and progress ahead of Morocco. Iran bowed out early with the consolation prize of a win against the United States. The supporters of Scotland and Jamaica left happy memories of their stay as they headed for home.

Drama in Saint-Etienne
The tie of the Round of 16 came in Saint-Etienne, where England and Argentina played out an epic contest. The first half was a mini-classic in itself: after a penalty for each side inside the first ten minutes, the teenage Michael Owen's goal of the tournament put England ahead before Javier Zanetti finished off a clever free-kick to equalise on the stroke of half-time.

After the break, goals gave way to sheer drama: David Beckham sent off for kicking out at Diego Simeone, Sol Campbell's 'winner' disallowed for a foul on the goalkeeper, extra time and penalties. Carlos Roa saved England's final spot-kick from David Batty and Argentina were through.

France, meanwhile, had home nerves jangling as they moved slowly towards their date with destiny. It took a 113th-minute golden goal from Laurent Blanc – the first in the competition's history – to break the resistance of a Paraguay side led by charismatic goalkeeper Jose Luis Chilavert. Italy were their quarter-final opponents, and this time it was the thickness of the woodwork which came to their rescue. Roberto Baggio flashed a free header past the post late in extra time, then Luigi Di Biagio rattled the bar with the decisive kick in the shoot-out, ensuring the Azzurri a third successive dose of penalty heartache.

Shoe fits for Suker
In the semi-final, the hosts faced the tournament's surprise package, Croatia. Entering their first FIFA World Cup since independence from the former Yugoslavia, Miroslav Blazevic's check-shirted charges upset European champions Germany 3-0 in the quarter-final before silencing the Stade de France when adidas Golden Shoe winner Davor Suker struck shortly after the break against France. Cometh the hour, cometh the man, however – right-back Lilian Thuram choosing the perfect moment to score his first ever international goals and send France into their first Final.

Marseille staged the other semi-final between Brazil and a Netherlands side full of confidence after eliminating Argentina through an exquisite Dennis Bergkamp strike. After Ronaldo and Patrick Kluivert traded goals, Brazil prevailed on penalties leaving the Dutch to ponder another near thing.

So to 12 July when, to borrow a line from La Marseillaise, "the day of glory arrived". It was a game that began with the mystery of Ronaldo's late reinstatement on the team sheet in place of Edmundo. Amid reports of a pre-match fit, Ronaldo was a strange shadow of his usual self and France, despite the absence of the suspended Blanc, were soon in command. Two Zidane headers from corners gave them a 2-0 interval lead. Despite Marcel Desailly's second-half dismissal, Aime Jacquet's side even managed a third as Emmanuel Petit concluded a counterattack in the last minute.

The final whistle from Moroccan referee Said Belqola, the first African to officiate at a FIFA World Cup Final, was the signal for the entire population to celebrate. A team representing the multi-racial mix of the modern France had united the nation. The Champs Elysees alone attracted over a million revellers, who danced through the long night.