Mexico became the first country to stage the FIFA World Cup™ finals for a second time when football's greatest show returned to the site of Brazil's 1970 triumph, but this time it was Argentina who shrugged off the heat and high altitude to emerge victorious, inspired by their captain Diego Maradona who dominated the tournament in a way that arguably only Pele had done before.

The statistics tell that Argentina's celebrated No10 scored five and created another five of his team's 14 goals en route to a 3-2 Final victory over West Germany, runners-up for the second successive tournament. Yet that was only half the story. The majesty of one of Maradona's strikes and the notoriety of another seemed to capture the essence of a man described by France's L'Equipe newspaper as "half-angel, half-devil".

Both those goals came in a 2-1 quarter-final victory over England at the Azteca Stadium that became an instant classic. The first, in Maradona's words, came from the 'Hand of God', the little playmaker raising an arm and flipping the ball past Peter Shilton as the big goalkeeper came out to punch clear. The second, just three minutes later, was from the feet of a genius: picking the ball up inside his own half, 'Dieguito' set off on a dribble which left five England players, Shilton included, trailing in his wake before he found the net.

Mexico had earned the right to host the 1986 FIFA World Cup after Colombia withdrew citing financial reasons. A terrible earthquake in September 1985 provided a tragic prelude – some 20,000 people died – but the stadiums were not affected and the country revived to stage a memorable tournament.

Lineker's goal rush
If Maradona was the star attraction, there were other heroes, among them England striker Gary Lineker, winner of the Golden Shoe. Lineker struck six goals – three of them in a decisive group game against Poland – to help his side recover from a poor start and the loss of injured captain Bryan Robson. With England trailing 2-0 to Argentina, he narrowed the deficit and came within a whisker of a late equaliser. 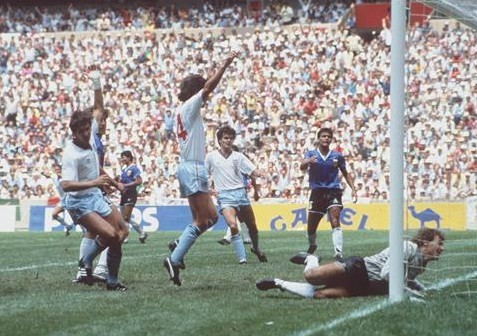 Denmark, one of three newcomers alongside Canada and Iraq, lit up the early stages with an attacking approach that earned them three straight wins, one over West Germany, and the nickname 'Danish dynamite'. Their forward line included Michael Laudrup and Preben Elkjaer, who scored a hat-trick in the 6-1 demolition of Uruguay.

USSR recorded the biggest victory of the first round, 6-0 over Hungary, and impressed with a team packed with players from UEFA Cup Winners' Cup winners Dynamo Kiev – notably Igor Belanov, soon to be voted the 1986 European Player of the Year – and put together at short notice by that club's coach, Valeriy Lobanovskyi.

Like the Danes, the Soviets won their first-round group but came unstuck in the second round, losing 4-3 to Belgium. Belanov's treble in Leon that day made him the third man to have struck a FIFA World Cup hat-trick yet finished on the losing side. Denmark's demise was even more dramatic: beaten 6-1 by a Spain side for whom Emilio Butragueno struck four times.

Morocco make history
This FIFA World Cup had a change of format, with the second group stage dropped in favour of a last-16 knockout round. This meant the four best third-placed teams all progressed but there was no need of a 'second chance' for Morocco, who became the first African team to survive the first round by winning their group thanks to a 3-1 success over Portugal, before succumbing to West Germany.

The Germans then needed a penalty shoot-out to get past hosts Mexico for whom Manuel Negrete had earlier scored one of the finals' best goals, a spectacular scissors-kick against Bulgaria. Three of the four quarter-finals were settled this way. While Belgium – with eccentric goalkeeper Jean-Marie Pfaff prominent – overcame Spain, France ended the hopes of Brazil in a contest described by Pele as "historic".

France, the European champions, had already eliminated holders Italy but they faced a more formidable rival in the South Americans who, with the score at 1-1, missed a chance of victory when goalkeeper Joel Bats saved Zico's penalty. Although Michel Platini missed his effort in the ensuing shoot-out, fellow midfielder Luis Fernandez struck to send France through. Unfortunately for Les Bleus, they had to settle for third place after falling once again to West Germany in the semi-final.

Maradona scored another goal to remember in Argentina's victory over Belgium in the other semi-final but Argentina's captain found it less easy in the final, shadowed as he was by Lothar Matthaus. One of the unsung heroes of Carlos Bilardo's team opened the scoring, Jose Luis Brown, a central defender in search of a club side. Jorge Valdano doubled the lead but the Germans fought back, Karl-Heinz Rummenigge and Rudi Voller both striking in a six-minute spell.

Not even Matthaus could keep Maradona quiet for 90 minutes, though, and parity lasted just three minutes. Maradona sent Jorge Burruchaga running clear in the 83rd minute and Argentina had their third goal and, with it, a second world crown.