Thomas Muller has said he never believed he would win the Golden Boot before the World Cup began. 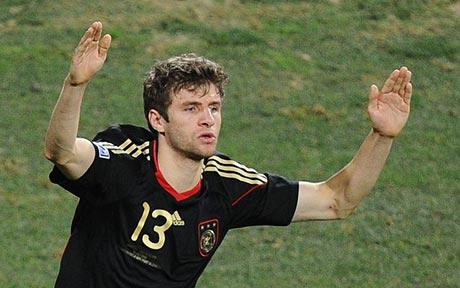 Incredible: Thomas Muller cannot believe he has won both the Golden Boot award and the Best Young Player Award at the World Cup.

The 20-year-old forward, who only made his international debut in March, scored five times at the World Cup to clinch the award.

"This is just incredible for a newcomer to the World Cup. If anyone had told me I'd end on eight scorer points, I'd have said they were kidding me," Muller said.

"It's an honour of course, but at the end of the day, I'd rather have had the World Cup itself."

"It's a huge honour to be part of a group including the likes of Pele, Franz Beckenbauer, Michael Owen and the most recent winner, Lukas Podolski," added Muller.

"For me personally, it's terrific confirmation of the work I've put in over the last year. I'm delighted my great run has continued here, and I've really enjoyed it too. The honour will be with me for all time, and it's a wonderful memento too."