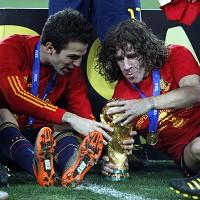 Cesc Fabregas hailed a historic moment for Spain after he helped La Furia Roja to their first World Cup triumph.

Fabregas, who has had to play a substitutes' role all tournament, said: "I was a bit down because I had not played as much as I had wanted but in the end it has all been worth it. This is an historic moment for Spain and it may never be repeated - and I dedicate this to my whole family."