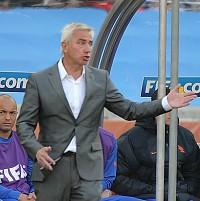 Holland coach Bert van Marwijk goes into the World Cup final against Spain already knowing what it is like to be a world champion.

The Dutch coach won the world klaverjassen championship with his father back in 1973, the year before Johan Cruyff and co. showed the planet what 'Total Football' was all about by reaching their first World Cup final.

"It's unbelievable, the most important match in my football life. It is quite something and this applies to all my players. No Dutch player has ever become world champion and that is extraordinary but we approach it as a special match."