Germany coach Joachim Loew praised the way his "champion team" overcame illness in the camp and fought back from adversity again to beat Uruguay 3-2 in a third-place World Cup play-off thriller. 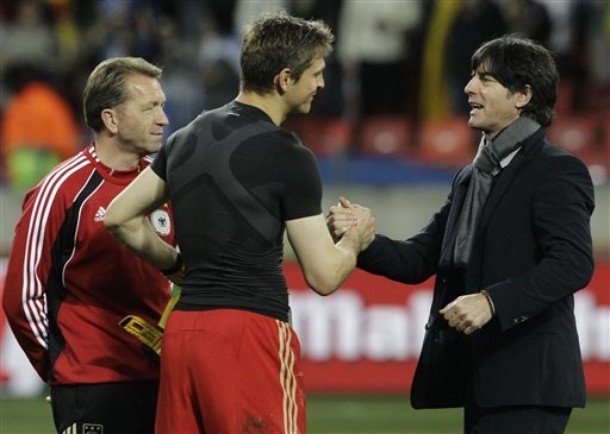 Trailing 2-1 early in the second half and with their two first-choice strikers and captain watching from the bench after being struck by flu, Germany levelled through Marcell Jansen and won it eight minutes from time with a Sami Khedira header.

"Both sides wanted the victory, both had great chances but when we were trailing we could see the strength of this team," Loew told a news conference.

"I'm so happy to see them turn it around, they thoroughly deserved to win.

"We knew it was important to finish off with a win, but champions rise again, we rose to the occasion again and my players are satisfied. Our objective was to travel to Soccer City (for the final), but tonight we saw so much joy."

Having seen his young team come of age with four-goal thrashings of Australia, England and Argentina before bowing out to Spain in the semi-finals Loew said there was no reason for dejection.

"This World Cup was truly remarkable," he said. "We worked really hard, we invested really hard, many players had no tournament experience whatsoever.

"What I'm incredibly proud of is that the team were great on and off the pitch, they were wonderful, they showed great character and identity and knew the importance of being great off the pitch, brave, respect for each other.

"They played for each other, we proved that in every match. The day after Spain, everyone was struggling but there's no need to be disappointed. We will travel home feeling great."

Uruguay too will travel with its heads held high after its best tournament performance for 40 years and after giving its all in Port Elizabeth.

"They put on a great show, possession went from side to side, the team who were better in the area and made fewer mistakes won and it was our turn to lose this time," said coach Oscar Tabarez.

"We showed our purpose and intentions, on a level playing field against a great opponent. We showed we can play any team in the world, there's nothing beyond this. We lost, but we could have won.

"We had chances we didn't take. This is what football is all about. The second German goal for us was like a bucket of cold water."