Dutch playmaker has never been a favourite with team-mates or fans, but that will change if he wins them the World Cup 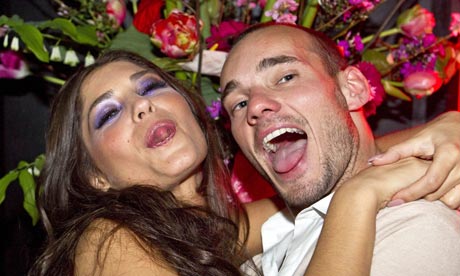 The song everyone in the Netherlands has been singing along to these past few days is Majesteit (Majesty). Written spontaneously by a singer and a cabaret artist while on safari in South Africa during the World Cup, it takes the form of an appeal to Queen Beatrix. "Majesty, majesty, do you have some time next week?" it starts, and then advises her that her team are about to become world champions, and she needs to get on board. "You can prove your bravery/By putting on a Bavaria dress," they advise. However, if she does not join the fun, then, Majesty, majesty, you will have lost your job And the new queen is called Yolanthe.

Yolanthe is Yolanthe Cabau van Kasbergen, actress, TV presenter, and Wesley Sneijder's Wag. Together they are the most famous and most ridiculed celebrity couple in the Netherlands. The song is best understood as a cautious rapprochement from the Dutch people to the little playmaker: if he wins them the World Cup today, they may actually start to like him.

Sneijder was born into a working-class family in Utrecht 26 years ago, part of a Dutch golden generation (in this case the phrase is not ironic). Arjen Robben, Rafael van der Vaart, Robin van Persie, Nigel de Jong and Johnny Heitinga – about half the team who will start the final – were also born in 1983 and 1984.

But whereas Robben is a sui generis phenomenon, a Brazilian footballer born in the drab northern Netherlands, the others were shaped into typically Dutch footballers during childhoods spent at Ajax and Feyenoord. None is more typically Dutch than Sneijder. He is like a pocket-sized tribute to the nation's football tradition: a brilliant two-footed Ajax-raised passer with a big mouth. He shot through Ajax's youth teams, usually in tandem with De Jong, who in the days before he became an enforcer fancied himself as a footballer. Little Wesley would curve in the free‑kicks, with either foot according to taste, and little Nigel would run in and head them home.

Like many of the best central midfielders in this tournament – Xavi, Andrés Iniesta or Mesut Ozil – Sneijder would probably never have been given the position at an English club. After all, he is only 5ft 7in. Ajax, like Barcelona, never worried about height. Aged 18 he was promoted to the first team and three months later he was playing for Holland.

The only problem was his personality. Even at Ajax, nobody could quite recall anyone so small and so young with such a big mouth since the waif-like "Jopie" Cruyff had made his debut in 1964. Amsterdammers call the style Amsterdamse bluf. Elsewhere it is called something else. When Ajax's then coach Ronald Koeman dared start the 20-year-old Sneijder on the bench, the kid came on as a sub, scored, and then swivelled to the bench and raised his middle finger at Koeman. Jaap Stam, who ended his playing days with Ajax, phrased it in the cliches mastered over a successful international career: "Wesley is a bit of a controversial person and he really knows what he wants. He's not afraid to voice his opinion. He's a great guy and I kind of like players like him."

Real Madrid briefly kind of liked him, too. In 2007 they paid €27m for him. There was talk of his younger brother Rodney coming along from Ajax, but Sneijder prohibited the move, saying: "I am not a supporter of juniors increasingly going to top clubs. I have told him he must first try to break through at Ajax." Rodney, now 19, languishes in Ajax's reserves. Jeffrey, the oldest brother, played four professional matches for Stormvogels Telstar.

Sneijder accepted Real Madrid as his due. He expects the world, and generally gets it. Yolanthe was voted sexiest Dutchwoman so regularly that one year she withdrew from contention to give others a chance. One day Sneijder texted her. They began going out. Soon afterwards, on an aeroplane, he grabbed a microphone and proposed. Thankfully, they have not yet accepted offers to star in a reality TV show, but the point is that Sneijder is confident.

About a year ago, though, everything suddenly seemed to fall apart for him. Real began buying galácticos. Initially Sneijder was sure the club woule not sell him. "My situation is clear," he reassured Dutch fans. He advised his buddy Van der Vaart to leave Real and go somewhere he was wanted. Then, to Sneijder's surprise, Real sold him and let Van der Vaart stay. "The people who now run Real Madrid are not fine people," Sneijder lamented.

Influential people inside Holland's camp were tiring of him, too. In one incident, at breakfast with the Dutch team, Sneijder had asked Piet Velthuizen, goalkeeper of Vitesse Arnhem (but perhaps soon of West Ham): "Hey, Piet, how much do you earn?" "€400,000," Velthuizen had proudly replied. "Don't you think it's funny," Sneijder said, "that I make 20 times as much as you?" After the exchange was leaked, Sneijder protested that he and Velthuizen had been joking. That may be true – footballers' humour is no laughing matter – but the conversation was classic Sneijder.

He was a disruptive force in the Dutch team, quarrelling with his enemy Van Persie over who got to take free-kicks. In the end the Dutch assistant coach Frank de Boer ruled in favour of Sneijder. Challenged on this, De Boer replies with impeccable logic: "Well, where else am I going to put that Smurf when we get a free-kick?" Sneijder does not typically rule the skies like Duncan Ferguson did. His header that slayed Brazil was such a surprise that he ran off smacking his forehead and chuckling.

But last summer, the people who run the Dutch team, knowing the damage the Dutch tradition of conflictmodel had done to their football, were thinking of not taking Sneijder to South Africa. Then José Mourinho saved his season. Much as Sneijder had wooed Yolanthe, the former Inter coach sent Sneijder daily texts expressing his love. As with Yolanthe, it was a meeting of souls. Sneijder joined Inter (a snip at €15m) and said of his cocky little manager: "He could have been my father."

Sneijder loved the way Mourinho sat at the back of the plane among the players, instructed Sneijder not to bother defending, and knew to attack through Xavi's territory when Barcelona lost the ball. Together the little men won Serie A, the Italian Cup and the Champions League. Sneijder capped the season by making a celebrity conversion to Catholicism, inspired by the formidable duo of Yolanthe and Inter's captain Javier Zanetti. Their impending marriage is dreaded in the Netherlands as a likely reliving of the Posh and Becks union done in the manner of tragedy repeating itself as farce. Most English fans by now think it inevitable that footballers behave like celebrities, but Dutch supporters still like their players to be ordinary. Sneijder is not.

Yet he set aside his exhausting personal schedule for a few weeks, flew to South Africa, and has been the best Dutch player here alongside Mark van Bommel. He has sprayed inch-perfect passes and scored five goals. Not everyone is overjoyed. David Winner, author of Brilliant Orange and a British custodian of the Dutch tradition, notes that three of Sneijder's goals were deflections. Henk Spaan, compiler of the authoritative list of the 100 best Dutch footballers ever, when asked where Sneijder now ranks, replies: "He's so lucky I'd advise him to play in every lottery. Against Spain he'll probably score off the referee's back."

But nothing anyone says now can dent Sneijderian cockiness. Deflections aren't luck, he explains. "You have to look for it, to force it. That's what I do. You have to have the horniness to go for goal." And he adds, in words not spoken by an England player in South Africa: "I'm enjoying every day here. That helps too. It's fantastic to be on the field."

The old conflict with Van Persie (who also refers to Sneijder as The Smurf) is now merely simmering. When the striker was substituted against Slovakia, he allegedly shouted at Holland's coach Bert van Marwijk that he should have taken Sneijder off instead, but Van Persie denied saying it. Against Uruguay it was noticeable that Sneijder kept passing to a nervous Robben rather than to Van Persie, but nobody can build a strong case against Sneijder now.

In any case, he has chosen to be deaf to the usual Dutch disparagement of his life and personality. In South Africa, he handed his laptop to Yolanthe for safekeeping to avoid the media reports. Now he is going about crowing. For once, who can blame him? As if on the sofa with his psychoanalyst, he told the Dutch wire service ANP about a dream he had on Wednesday night: "Yes, it was about the final. Who won? Who do you think? It was a remarkably good game. Afterwards I was satisfied. I got another drum as man of the match. Ha, ha, ha. When I woke up, I was lying in the canal." (That last line is not some Freudian reworking of drowning anxieties. The Netherlands traditionally celebrates victories in big tournaments – at least, its one victory in a big tournament in 1988 – with a boat tour through the canals of Amsterdam. Drunks jump in the water.)

Sneijder is the self-help guru's dream: the man with perfect confidence. He finds it "not surprising" that Manchester United want to sign him, but is talking about extending his contract at Inter until 2015.

That everyone thinks Spain will win means nothing to a man who believes he has everything. "Do you think they're not worried?" he asked the ANP. "Yesterday I had contact with Sergio Ramos, my old team-mate at Real Madrid. He texted, 'Will you take it easy, Wes? You've already got three prizes.' That says enough, doesn't it?"

If he does win it, it is possible he will cease to be the most ridiculed man in Holland.