It’s do or die time in Soccer City, as a new name will be engraved onto the World Cup final trophy... 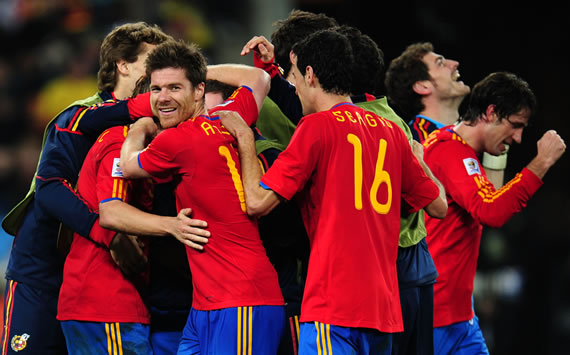 Two of Europe’s great flamboyant footballing nations are preparing to contest the World Cup, yet the Netherlands have suddenly become a pragmatic force who are difficult to defeat while Spain have at times been over elaborate in attack and have been sneaking through games by the tightest of margins for the duration of the competition.

Of the two nations, the Oranje have the greater World Cup pedigree. During the 1970s, ‘Total Football’ caught the world’s imagination, yet twice the Netherlands came up short when placed in the final. It is coach Bert van Marwijk’s job to ensure that it’s third time lucky for the Dutch.

“We have come here for the ultimate prize, that is our goal and we will only enjoy this tournament if we win it," a determined Van Marwijk told the press prior to the semi-final.

Favouring the Netherlands is the fact that they’ve had a full 24 hours more than Spain to rest up prior to this monumental occasion. The Oranje met Uruguay in the first semi-final, which was predicted to be a closely-fought match but ultimately ended in a five-goal thriller, with the Europeans edging through 3-2 despite failing to hit their best level.

Previously, Van Marwijk’s side had played with the pomp of world champions. Wesley Sneijder has been superb in the playmaking role, Arjen Robben looks sharp after injury out wide, while Mark van Bommel has dictated things from his anchoring role in the centre of the field.

If it all comes together again, the Netherlands can finally put to bed their tag of being ‘the best nation never to win the World Cup’.

Spain, however, can also lay claim to the same tag. Throughout the competition Vicente del Bosque’s side have had to battle demons of Spanish past, not helping their country’s traditional reputation of ‘bottling it’ on the big stage when they lost 1-0 to Switzerland in the opening match of the competition.

La Furia Roja have not been especially convincing since then. Five successive wins may have been accrued, but only the first of these, which was against Honduras, was by a greater margin than a solitary goal. To compound Spanish concerns, they’ve tiptoed through the knockout rounds by winning 1-0 in each of their three games, which have come against Portugal, Paraguay and Germany.

At no stage, however, have La Roja looked truly threatened. They’ve commanded possession well in all of their fixtures and have generally been on the front foot against sides who have stubbornly packed 10 players behind the ball in an attempt to stifle their technical excellence. On each occasion, Spain have found the decisive strike in the second half, though they have contrived to over-complicate matters on countless occasions.

“One bad game and you are out. That is how it works in the World Cup and that should be a warning to us on Sunday,” Xabi Alonso told the press earlier this week.

“It is a privilege to be among this group of players. There is so much quality. We have great competition and that is good for the team because it brings the best out of everyone.”

European champions from two years ago, the Spaniards may not have the World Cup pedigree of the Dutch, but they do certainly have the big game experience and winning mentality that allows them to start as favourites to go down in history as the first team from Europe to win the competition on a foreign continent. 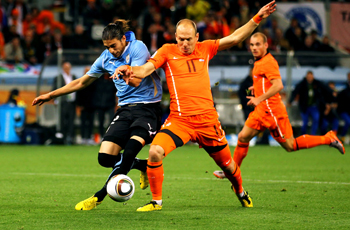 Bert van Marwijk’s side are in a state of excellent health. Though a handful of the top Oranje stars were rested from training on Friday, the coach will have a full complement of players to select from come Sunday.

Maarten Stekelenburg had caused some concern due to a hip problem, but he has been training normally, while the dental problems acquired by Demy de Zeeuw in the semi-final have been cleared.

De Zeeuw and Khalid Boulahrouz will both drop to the bench as Gregory van der Wiel and Nigel de Jong return from suspension.

Vicente del Bosque, like his counterpart in the opposite dugout, will be able to field his first choice XI. That may mean that Fernando Torres is once again on the bench, especially after Pedro produced such an exciting display in the semi-final.

Raul Albiol is the main injury concern for La Roja, and it seems likely that he won’t have a role to play come Sunday.