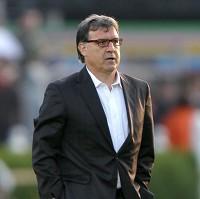 Gerardo Martino has agreed to stay on as Paraguay coach until after the Copa America next year.

Paraguay's football federation (APF) said on Thursday that they would give Martino time to consider his position following speculation the Argentinian would step down after leading La Albirroja into the World Cup quarter-finals for the first time. However, Martino insists he will continue as manager for another year.

"For me, it has been five months that the new contract has already been in order," said Martino. "However, after the Copa America (hosted by Argentina) a cycle will come to an end and I will leave my post."