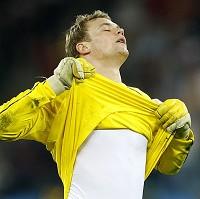 Although it took Carles Puyol's late header to set up a final meeting with Holland at Soccer City on Sunday, in truth, Germany were outplayed. It was a sad way for Joachim Low's young team to exit the tournament given the positive impression they had made by knocking four goals past England and Argentina.

"We didn't quite have the courage we needed," Neuer said. "We didn't show enough attacking intent and we failed to create enough chances."