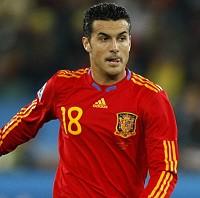 Spain striker Pedro has admitted he was surprised to start Wednesday night's World Cup semi-final ahead of Fernando Torres.

The Liverpool forward was dumped to the bench by coach Vicente del Bosque after failing to score a single goal in South Africa. Pedro repaid his manager's faith by producing an excellent performance as the Euro 2008 winners booked a first final appearance thanks to Carles Puyol's powerful second-half header.

"I was a little surprised to start," said Pedro. "But thankfully I become involved in the match. I am very happy with the way we played and our progression to the final."