Home - News
Germany v Spain: victory is a homage to Catalonia and the world's greatest club side
08/07/2010  by Telegraph.co.uk
Text size: A A A

How fitting, how totally perfect, that a victory made in Barcelona with a goal fashioned in Barcelona should be scored by Senor Barcelona himself. 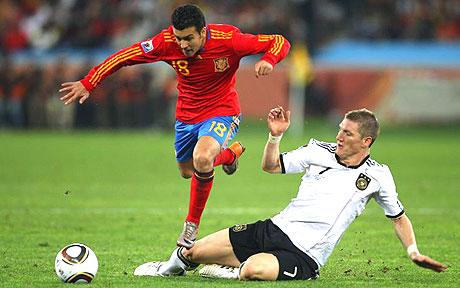 And how ironic that a victory for the silk, style and skill of the finest club team the world has witnessed in a generation should ultimately be sealed by a thunderous goal from Carles Puyol which felt so straightforwardly un-Barca like that you might have imagined it was created in Barnsley rather than Barcelona.

You could not but feel delight for Puyol, the indomitable leader who so often comes over as a footballing Attila among a bunch of dazzling aesthetes. Yet this was a night when we learned about the other side of Spain – and Puyol’s Barcelona; that there is a real steel lying behind their glorious flow.

What a grand player. Not even a herd of wild John Terrys would have stopped Puyol blasting his way through to head home the goal which simply underlined Spain’s absolute superiority. Even Gerard Pique might have feared for his own safety as the scraggy bull came charging.

Yet it felt so right. The corner delivered from the left by the great 30-year-old Xavi and the first ever effort the 32-year-old Puyol has ever put on target in a World Cup in 13 attempts. Yes, 34 years as men and boys, this pair have been doing the Barca tiki-taka; how fitting that the night when Vicente del Bosque, the old Real Madrid boss, decided to trust even more in the cult of the Nou Camp that they should make history for Spain.

Pedro flitted in and could not have looked more at home if the entire 61,000 crowd were holding up placards spelling out Mes Que Un Club. He was bright and brilliant; he did a pas de deux over the ball; he shot from 35 yards; he believed he was invincible; he looked like the future.

One feels for Bert Van Marwijk, the Dutch coach, who has to try to succeed where Joachim Low, for all his coaching enterprise and for all the youthful athleticism and courage of his side, singularly failed. “They can beat anybody,” he lamented, his lucky sweater looking as blue as him. For this felt like Euro 2008 revisited, only dizzier. Stop the carousel; the Germans want to get off.

Van Marwijk said before the tournament that his side liked “to play like Barcelona” before adding in typically hangdog fashion: “The only thing is they do it better than us.” On Sunday, one suspects he will find he is not wrong.

For, even with Real Madrid’s Xabi Alonso in magnificent form, spraying around the sort of grandstand passes Steven Gerrard quite failed to pull off here and breaking up so many prospective German counter-attacks, this really did feel like La Roja masquerading as Barca, with no less than seven slick citizens of the Nou Camp spinning Germany around.

David Villa was Barca’s honorary seventh man, not actually having played a game for them yet. And, by the by, when he does start running on to the passes of Xavi and Iniesta next season, God help Europe’s club teams.

One goal was a paltry reflection of their complete command, even if teams who show some ambition against them – only Chile had previously done so – are liable, like Germany, to be barbecued. For a moment, the fear was that they would not be rewarded, that Germany might snatch victory just as a patient Inter had finally snared Barcelona in the Champions League.

But if the world can see just one more command performance from Spain, if they can bamboozle Holland in the same grand manner on Sunday, and if Van Marwijk doesn’t turn out to be Jose Mourinho, won’t winning the World Cup final sweep away all that Barca angst about losing their Champions League crown?

For by sticking to Barca's glorious principles and showing that, yes, their style can beat the world again, what a triumph for the game that would be. We would then be able to hail the finest champions since the Brazil of 1970.