Clark Whitney opines that Germany’s lack of confidence in their attack-minded strategy left them with no chance of winning tonight's match.

“Our analysis was quite clear, we could only win the World Cup by playing attacking football and making life difficult for other teams,” he said to Bild.

“I want to see players getting into space and asking for the ball. This makes the game more fluid and dynamic,” he added. “If you don’t move around the pitch, you’re not even going to beat teams like Canada. That was our golden rule from day one. We go over it in theory and in practice every day.”

If that’s true, then what happened tonight? For more than 70 minutes, Germany looked hesitant, lethargic, and perhaps scared. Their life force, the extra 10% effort they showed against England and Argentina, was gone. Instead of bursting forward on the counterattack, the Germans played for corners.

It took Carles Puyol’s 73rd minute header to finally bring out the fight in Germany, but by that time, it was too late. At 1-0 down, Loew’s men were forced to chase the game, and bowed out in the semi-finals for the second consecutive World Cup. 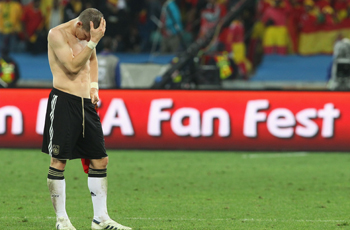 Maybe it was their Euro 2008 finals loss to nearly the exact same Spanish side. Perhaps it was Paul the octopus’ prediction that Spain would win. But by whatever cause, Germany completely abandoned the philosophy that had them playing the tournament’s best football.

It should never have ended this way. Their 4-1 victory over a poor England side may not have been all that much of a triumph, but their 4-0 quarter-finals hammering of Argentina, who at the time were comfortably the tournament’s best team, should have given Germany a boost of confidence. Apparently, it did not.

From the opening kick-off, the Germans (Miroslav Klose aside) showed far too much respect for their opponents. Rather than press high up the pitch, they backed off, allowed Spain to dictate the tempo, find their rhythm, and ultimately, win the match.

By letting Spain control the pace, Germany effectively tried to beat the Iberians at their own game, a slow, pass-based style that emphasises technique above all other factors. That was never going to happen. Ironically, Spain used bits and pieces of the Germans’ strategy, and did so to great effect. Vicente del Bosque’s men pressed Germany, forcing giveaway after giveaway. They played with the confidence of champions and deservedly won.

The sad thing is, Germany could have done so much better. Their attacking play following Puyol’s goal was distinct from the Spanish style, but was stellar. Bastian Schweinsteiger began to link play near the edge of the penalty area, Mesut Oezil started to run at his opponents, and fullbacks Marcell Jansen and Philipp Lahm opened up space with overlapping runs. It might have been somewhat desperate, but Germany at least looked threatening. The overall statistics at full time suggest only a marginal difference in quality: the Germans won 49% of possession, and completed 75% of their passes compared to Spain’s 81%. And yet, Del Bosque’s men always had the composure and look of winners.

At the end of the day, Germany’s lack of confidence in their system ended any chance of them making a finals appearance. This is not to say that the game was Germany’s to lose: on another day, with a better approach from Loew’s men, Spain still might have won. However, abandoning their philosophy left Germany with absolutely no chance of winning tonight’s match. Their squad is still young, but if this 'golden generation' is ever to fulfil its promise, it will have to learn to respect its own potential.