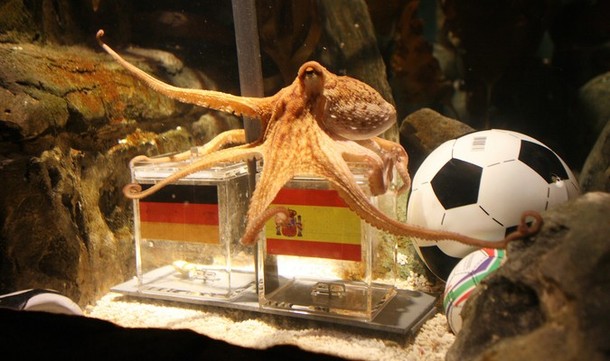 His home team has been knocked out. But Paul the "psychic" octopus is still a winner after correctly predicting Germany would be beaten during this morning's do-or-die World Cup semi-final clash with Spain.

German fans had been praying the two-year-old cephalopod had made an uncharacteristic cock-up when, from his aquarium in the German city of Oberhausen, he chose the Spaniards to triumph.

But now even hardened cynics must be thinking twice about dismissing advice from the football soothsayer, who has shot to fame during this World Cup with his ability to pick the outcome of matches with astonishing accuracy.

The method his owners use at Aquarium Sea Life is simple.

The container Paul chooses first is taken to be his prediction.

Paul became an international celebrity after correctly predicting Germany would beat Australia in their opening match, then lose to Serbia, then beat Ghana. He also correctly forecast German wins against England and Argentina.

Such is the popularity that surrounds the octopus that German news channel n-tv broadcast Paul's Germany-Spain prediction live, even having two reporters commentating on it.

And Paul lived up to the drama.

He initially moved towards the Spanish container before moving around the tank, and hovering over the German box.

He eventually opted to chow down on the mussels in the Spanish box, to the horror of the German football-loving public.

But Paul, it turns out, was just telling it as it was, with veteran centre-half Carles Puyol’s header sealing victory for Spain this morning.

Just what this means for Paul now is uncertain.

Following the quarter-final prediction in which Paul correctly guessed Argentina would lose to Germany, the Argentinians threatened to kill the octopus and put it in a paella.

The newspaper El Diaeven printed this recipe for anyone daring to capture Paul: "All you need is four normal potatoes, olive oil for taste and a little pepper."

Argentinan chef Nicolas Bedorrou has suggested on Facebook a far more simplistic and brutal way to cook the octopus.

"We will chase him and put him on some paper. We will then beat him [but correctly!] in order to keep the meat tender and then put it in boiling water."

German fans have now turned against Paul, who was born in Britain and later moved to the German aquarium, after he forecast the Spanish win.

And on Berlin's "fan-mile", some sections of the crowd also turned against their former hero, with German fans singing anti-octopus songs.

According to Der Western daily paper, there have been "a host of comments on Facebook, Twitter ... suggesting Paul should be fried, barbecued or turned into a seafood salad or paella".

"Others wanted to throw him into the shark tank," the paper wrote on its website.

If he survives those threats, he will go on to make one final prediction this World Cup - who wins the third-place play-off between Germany and Uruguay.