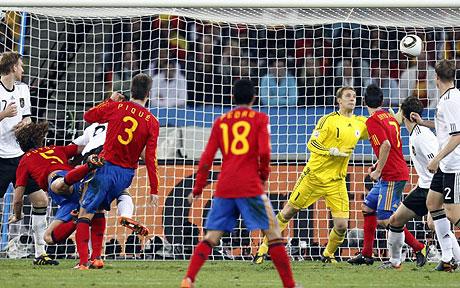 Nobody expected the Spanish inquisition in the air. Nobody anticipated the European champions, the masters of the intricate passing movement, to stoop to conquer with a header from a centre-half at a corner. It was surely beneath such stylists.

Yet there was Carles Puyol, hair flying in all directions like an Old English Sheepdog chasing a stick, leaping to head Spain into the final of the World Cup.

It was like finding the Rolling Stones busking in Leicester Square or Lewis Hamilton scratching a living on the dodgems. It was just so unlikely.

Spain never take the high road. In becoming European champions two years ago, and in progressing across the Veldt, Spain have traditionally taken the scenic route. They pass and they move, they build and build. They are Barcelona in red shirts, passing opponents into submission.

But on Wednesday night they went all Wimbledon on us in the 73rd minute, all direct football from the moment that the driven corner left Xavi’s foot until it thumped into that bony forehead of Puyol’s and flew past Manuel Neuer, Germany’s keeper. Manuel beaten by the man from Barcelona. Now that would have confused Basil Fawlty.

Until then, Xavi and Andres Iniesta had focused on short-corner routines, more in keeping with their technique-laced DNA and also an acknowledgement of Germany’s strength in the air. So Spain initially kept their high balls low, as a famous commentator once observed, until deciding to throw Germany a curveball.

Maybe the Germans had been lulled into a false sense of security by Spain’s hitherto use of short corners. For such a well-drilled team, Germany surprisingly switched off for a split second and Spain had their chance.

What made Spain’s goal even more surprising was that Puyol and Gerard Pique were unchallenged as they stormed towards Xavi’s delivery. Puyol won the race and Spain were in the final. Deservedly so.

For all Germany’s dynamic football this tournament, and the three occasions when they have hit four, the final would have been a poorer place without Spain’s conquistadors. They play with so much joy, so much freedom. Even Pique is encouraged to glide upfield. Even the full-backs, particularly Sergio Ramos, capture the team’s buccaneering spirit.

Spain’s commitment to football as the Beautiful Game (with the occasional, devastating moment of directness) should be cherished. For the luddites of the modern game, like England, Sunday’s World Cup final between Spain and Holland will be a celebration of the way the game should be played: with flair, with intelligence. A tournament that has been a festival of fun off the pitch may become a showcase for football’s most breathtaking qualities on it.

Adding to the lustre of the occasion, a new name will now be engraved on sport’s greatest trophy. Holland have graced two finals before, both losing ones in the Seventies, but this is completely unchartered territory for Spain. Soccer City promises a fascinating spectacle, a feast of football with such technical individuals as Xavi and Andres Iniesta, Arjen Robben and Robin van Persie.

Holland will certainly be more adventurous than Germany. Joachim Low’s men seemed content to contain and hit on the counter until Puyol’s goal forced them to venture out more. Yet it was too little, too late. The place in the final went to the team which merited it most.

Iniesta and Xavi ran midfield, Xabi Alonso swept around some perfect passes while Pedro trailed menace with every run. If Fernando Torres starts against Holland, as he should, and David Villa returns wide, Spain’s cutting edge will be even sharper.

Germany will come again; they always do, and must do with so many young players. The heart went out to them at the end as they sat on the unforgiving Natal soil, their bodies drained almost of all life. Per Mertesacker slumped in the dug-out for 10 minutes after the final whistle, holding his boots in his hands, consoled by Oliver Bierhoff.

They knew that they had been deservedly beaten, that their pursuit of a fourth star on their shirts must now wait until Brazil in four years' time.

They badly missed the sinewy right-sided dynamism of Thomas Muller, who was sitting up in the stands. Muller light, Germany lacked some substance. They could, really should, have been behind before Puyol intervened.

Villa’s low effort was saved by the alert Neuer. Puyol headed over following a short-corner routine involving the brains trust that is Alonso, Xavi and Iniesta.

The half then disappeared down a cul de sac, a well-appointed route but with no way through. The Spanish approach was predictably attractive, seeing a Villa flick here and an Iniesta dribble there. Such pressure drew typical defiance from Germany, bringing a Bastian Schweinsteiger tackle here, a Mertesacker interception there.

Spain were not all silky passes; there was a steel to them as Lukas Podolski discovered when his left foot felt the force of a Ramos stamp. Germany had their moments, Piotr Trochowski briefly testing Iker Casillas, while Mesut Ozil screamed for a penalty when clearly brought down by Ramos.

Spain decided to mix it up, to rip up their tactics book and fling one into the box. Puyol’s header did the rest. Nobody expected that.