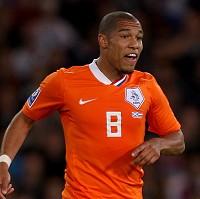 Nigel de Jong sweated his way through the hardest game of his career on Tuesday night - and he was not even playing.

De Jong was a helpless spectator, having been ruled out of Holland's World Cup semi-final with Uruguay through suspension. Thankfully for the Manchester City star, the Dutch emerged triumphant thanks to second-half goals from Wesley Sneijder and Arjen Robben, and he can now look forward to the game of his life at Soccer City on Sunday.

"That was the hardest game I have ever been involved in," said De Jong. "I am more tired than all the other guys in the dressing room put together."