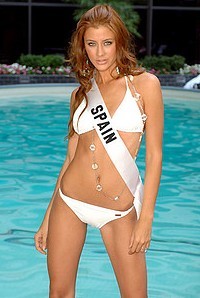 The World Cup is reaching it's climax, and with Spain facing Germany in the second semi-final I have decided to have a look for a Spanish beauty to put up against Germany's Sarah Brandner, and I have found the lovely Elisabeth Reyes.

This former Miss Spain is a former girlfriend of the Spain defender Sergio Ramos, and as a serial WAG, is now the partner of Valencia's Alexis Ruano.

She is famous in her own right in Spain, and has appeared regularly on Spanish TV. She recently came third in the Spanish version of Celebrity Come Dancing (Mira quien Baila), so she is talented as well as being gorgeous!

You don't have to guess who she will be supporting this evening!