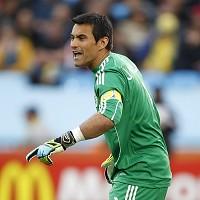 Paraguay captain Justo Villar has lashed out at FIFA for giving the World Cup to South Africa, claiming the country were not prepared to host the tournament.

South Africa has generally garnered praise for its hosting of football's showpiece event but Villar insists that behind the scenes it was a different story.

"I think South Africa weren't prepared to host the World Cup," he told Telefuturo. "A mountain of things happened. Like in the first game, against Italy, when we had to go to the hotel, the bus broke down - a new bus - and we had to wait 45 minutes and we had to go in taxis."