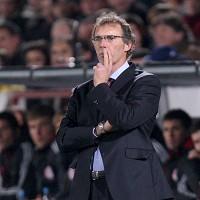 Laurent Blanc has expressed his pride after being unveiled as France coach on Tuesday morning.

Blanc was a key part of the France team which triumphed in both the 1998 World Cup, on home soil, and Euro 2000, and he insists even their dismal World Cup campaign under Raymond Domenech in South Africa this summer did not deter him from continuing his link with the national team.

"I am very proud to be here as coach of the France team," he said. "For me, the France team is above everything, it was a thread throughout my career. As a player I experienced difficult times but also some great moments."