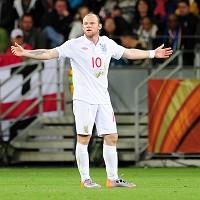 Sir Alex Ferguson claims the weight of expectation on Wayne Rooney was to blame for the striker's poor form at the World Cup.

Rooney failed to score in four matches and looked a shadow of the player who shone for Manchester United last season as England slipped out in the second round with a dismal 4-1 defeat to Germany.

The United manager was "not totally surprised" by England's failure - but said of Rooney: "I think there was such expectation on him. There was talk he was going to be the player of the tournament."