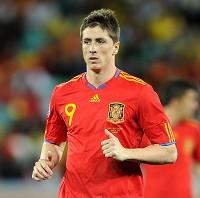 Fernando Torres admits Spain's World Cup clash with high-scoring Germany will be like a final as he looks to repeat his country's Euro 2008 success.

The Liverpool striker scored the only goal of the final against the Germans two years ago to help Spain lift their first major trophy for 44 years. Now the two sides are set to meet again in the last four of football's biggest tournament.

Torres said: "I am very proud. It is the first semi-final for Spain in World Cup history so this team is making history again. We have a massive game against Germany. It will be like a final."