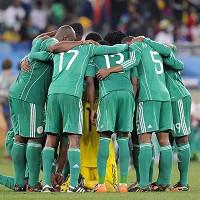 FIFA will monitor reports emanating out of Nigeria that the country's president has banned the national squad from international competition for two years after their disappointing World Cup.

A presidential spokesman made the announcement in Lagos on Wednesday after the Super Eagles bowed out of the tournament with just one point. In previous cases, FIFA have suspended a national association where governments have intervened in the running of the game.

FIFA said in a statement: "We have no official information on this matter. However, in general, FIFA's position regarding political interference in football is well known."