Ghana's Asamoah Gyan is jubilant after scoring Ghana's extra-time winning goal in the 2-1 win against the USA to send Africa's last World Cup contender into the last eight. 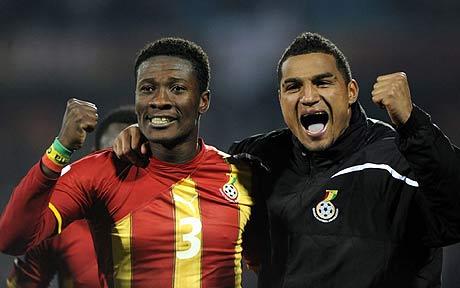 The South Americans had secured their progress with a 2-1 victory over South Korea earlier on Saturday.

Ghana become only the third African team to reach a World Cup quarter-final, matching the achievements of Cameroon in 1990 and Senegal in 2002.

"I am the happiest man in the world," said Gyan.

"In 2006 we made the second round, now we have gone a step further. We have made Ghana proud and the whole of Africa proud."

The Black Stars, who also defeated USA to eliminate them from the 2006 tournament at the group phase, are the last of six African teams that began the first World Cup on African soil.