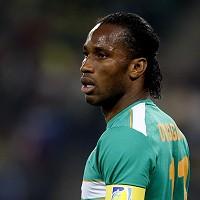 Ivory Coast captain Didier Drogba did not dwell on his side's ill fortune after their World Cup campaign came to an end.

The African side bowed out of the tournament with a hollow 3-0 victory over North Korea in their final Group G game after they had already earned a creditable draw against Portugal in their first game before a 3-1 loss to Brazil.

Drogba said: "To be able to play against Brazil and Portugal, two of the best countries in the world, is like a dream for our country. We were unlucky but at the same time really happy to have played those nations."