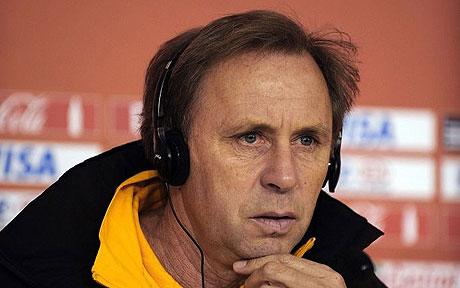 Tough talk: Ghana manager Milovan Rajevac wants his players to give their all in a bid to knock the US out of the World Cup

The Ghana team are the last Africa side standing in the World Cup and are determined to fly the flag into the quarter finals.

The match is given an extra edge because it is a re-run of the final group game in Germany 2006 when Ghana won 2-1 to send USA home.

Rajevac, whose side finished runners-up in Group D to Germany, said: "We are going to fight and do our utmost to get Ghana into the quarter finals. It will be difficult but we have a big opportunity.

"I am very proud of these boys. Their main strength is the unity of the team. We always play as a team and not as individuals and that's why we have managed to have success recently.

Defenders John Mensah and Jonathan Mensah have recovered from injuries but Isaac Vorsah is ruled out.

Rajevac, however, will not be taking the USA for granted.

The Serbian played in the US indoor soccer league as a contemporary of Pele, Johann Cruyff and Franz Beckenbauer and he has a respect for the way in which the American game has progressed over the past three decades.

He said: "America has grown into a football superpower but it also has sports which are given more priority.

"But the football team play with strength and speed. You never know how to deal with them.

"In the last half an hour they increase the tempo and speed and it is difficult to match them. Until the final whistle you don't know how to deal with them.

"Slovenia scored two goals against them and in the end the USA still nearly won."

Ghana's Samuel Inkoom revealed that Fulham's John Pantsil had been giving the team information about his club-mate, one of America's key men, Clint Dempsey.

He also reiterated the manager's rallying call that they were playing for the entire continent.

"All of the African countries will be supporting us and we are not going to disgrace them," said Inkoom. "We are going to make them happy.

"We are the Africa hope now and we are not going to disappoint them. We are going to win."