A World Cup that started so brightly for Switzerland has come to a tame end as Ottmar Hitzfeld's side failed to find a way past an industrious Honduras, who probably deserved all three points on their second half showing at the Free State Stadium in Blomfontein.

The pattern of the game proved unfamiliar territory for Hitzfeld's side at this World Cup, dictating the pace of the game instead of sitting and opting to hit the opposition on the counterattack.

Indeed as they upped their attacking effort in the second half, the Swiss were fortunate not to succumb to a suckerpunch from Reinaldo Rueda's plucky outfit who frustratingly lacked the finishing touch to find their first goal of the finals despite some excellent attacking play, particularly in the second half.

The Swiss dominated a largely forgettable first half and captain Gokhan Inler, the heartbeat of Hitzfeld's team and the fulcrum of their creative impetus in midfield, could have provided them with a lead ten minutes in after a neat one-two with Tranquillo Barnetta presented him with a chance on the edge of the box but he dragged his effort wide of Noel Valladares left hand upright.

While the Swiss were in control they failed to seize the initiative early on and when Stephan Lichsteiner found himself in space inside the Honduras rearguard his excellent low cross into the penalty box went unrewarded as no team-mate was within ten yards of what would surely have been a simple tap-in.

Barnetta switched wings to great effect and regularly had los Catrachos on the back foot and provided Eren Derdiyok with a wonderful opportunity to head the Swiss in front but his downward header at the back post was marginally wide.

As the half evolved the Central American outfit grew in confidence as they continued to frustrate and although much of their counterattacking endeavour was halted by the assistant referee's offside flag, there were signs that the pace of their attack could trouble the Swiss.

Blaise Nkufo finished the half with two glorious chances to head Switzerland in front. Firstly with three minutes remaining he bizarrely opted to chest Derdiyok's well delivered back post cross and then another back post delivery gave him a free header which he failed to put on target. 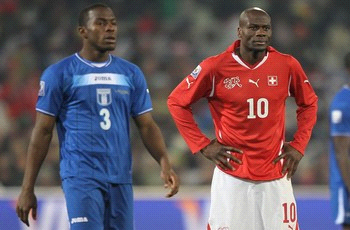 After the interval the game opened up considerably as both sides showed an improved attacking intent yet, crucially, the quality in the final third was still lacking as neither 'keeper was really stretched.

Hitzfeld signalled Switzerland's intent with the introduction of mercurial veteran Hakan Yakin at the interval and he made an immediate difference as the Honduran's failed to deal with his dribbling ability without conceding free-kicks.

Switzerland's attacking policy left space at the back for their opponent to exploit yet the Honduran's failed to take advantage of a number of gilt-edged counterattacking chances as they produced the better quality in attack in the latter stages.

David Suazo had a glorious chance to give Honduras a lead but somehow managed to direct his eight yard header off target with the goal at his mercy after a marvellous cross from Edgar Alvarez.

Then midway through the half Suazo returned the favour playing Alvarez in and from 15 yards, the 30-year-old did everything right but Diego Benaglio tipped over with a stunning close range reflex save.

Both sides went in search of the goal that would surely have won it, leaving acres of space at the back and although the Hondurans did roll the ball home Alvarez had frustratingly and needlessly strayed into an offside position.

Switzerland continued to probe but without really troubling Valladares and then in the dying minutes substitute Danilo Turcios produced a glaring close range gaffe, failing to get even the slightest touch on a ball that would have given his side a deserved three points.

In the end a disappointing early exit for the Swiss after beating Spain in the opener and they join Honduras on their way home from South Africa while Spain and Chile fulfill Group H expectations.