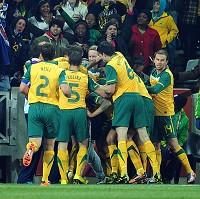 Australia ended their World Cup on a high with two second-half goals in a 2-1 victory over Serbia but Germany's defeat of Ghana meant neither side would go though to the last 16 of the World Cup.

Tim Cahill and Brett Holman scored for Australia deep into the second period before Marko Pantelic hauled Serbia back into their final Group D game in Nelspruit.

Australia's effort dragged them off the bottom of the group but it was too little too late as Ghana edged them out of the last 16 on goal difference.