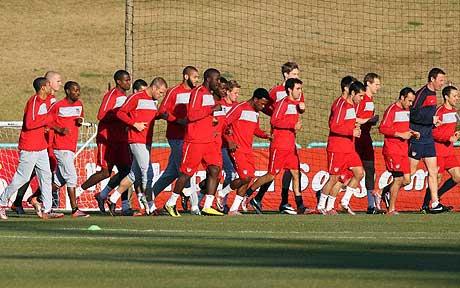 Both sides go into this game knowing that a win would, most likely, send them to the last 16, regardless of the result between England and Slovenia in Port Elizabeth. Such a delicately poised scenario should produce an attacking, attractive fixture from two teams capable of playing an eye-catching style.

The USA tend to be slightly more direct than the technically-gifted Algerians, their creativity channelled through wingers Landon Donovan and Clint Dempsey, both of whom are given licence to roam inside, switching flanks when suitable or even moving into central striking positions. Algeria are more rigid, looking to the mercurial Karim Ziani to orchestrate their attacks.

Landon Donovan v Nadir Belhadj: The Portsmouth defender has arguably been his nation’s most impressive performer in their opening two games, his appetite for attack endless and his delivery of a high and comparatively consistent standard. He may have to reign in those instincts to deal with Donovan, though. The LA Galaxy player has been in fine form throughout the group stage and sees this game as his, and his team’s, moment of truth.

Algeria prefer to play a quick counter-attacking game, absorbing pressure and breaking through Belhadj and Ziani. The USA’s style, which revolves more around possession and territory, may play straight into their hands. Rabah Saadane’s side are well-equipped to deal with the aerial threat of Jozy Altidore and they possess the pace to trouble America’s ageing backline.

Saadane insisted after defeat to Slovenia that his side were here simply to learn, while Bradley’s players spoke of his refusal to celebrate an impressive point with England, preferring instead to concentrate his mind on his next game.

Majid Bougherra: “We need to do more against United States. We’re aware that a win could see us through to the Round of 16 for the first time in our history. This is a match that could change our lives forever and provide us with one of the most memorable moments of our careers.”
Maurice Edu: “I can’t predict the future but reaching the next phase is our objective. We’re going to take to the pitch against Algeria fully determined to get the win that would put us through to the next round. It is a truly crucial match.”

Fact: The USA have three players who have scored in more than one World Cup competition. Landon Donovan's goal in the 2-2 draw with Slovenia put him alongside Brian McBride and Clint Dempsey.

Predicition: Algeria are poor; an easy win for the United States.