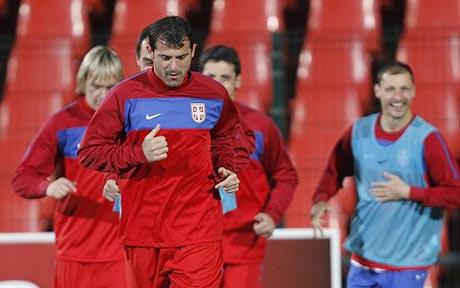 Dejan Stankovic hopes to lead Serbia into the knock-out stages

Prediction: After a rare defeat, by Serbia, the Germans will be like a wounded animal with Ghana the prey.

Australia can still qualify, but can they finish a game with 11 men? To have any chance they must do that for the first time. Serbia have three points despite being an underwhelming presence in this World Cup.

On the grounds that no assumption is safe in this competition neither team can rely on a German win, which the form book suggests is the likely outcome at Soccer City if they can keep all their players on the pitch. That should produce an open game in Nelspruit with both teams going for victory.

Australia are without suspended Harry Kewell and defender Craig Moore, while Serbia are concerned at the number of players on a yellow card, including the whole back four.

A draw will be good enough for Serbia if Ghana turn up a shock. A win will take them through. Tim Cahill returns after missing the Ghana match through suspension to give the improving Aussies a last crack at glory.

Pim Verbeek v Radomir Antic: This could be the last game in charge for Verbeek, who is quitting his post after the World Cup. The former understudy at South Korea to Guus Hiddink and Dick Advocaat did his job guiding Australia to the finals.

Like Verbeek assumed the Serbian national post at the start of the qualifying campaign. No stranger to working with star names after spells in charge at Real Madrid and Barcelona. Could do with a few more in this side.

Nothing but a win will do for Verbeek. Discipline has been his problem but an improved showing against Ghana has boosted belief. Expect a quick start.

Naturally cautious, Serbia rely on Nemanja Vidic to keep it tight at the back and to hit teams on the break through lamppost Nicola Zigic. That won’t change.

Nemanja Vidic v Tim Cahill: Cahill was mortified at being sent off against the Germans and is fired up for this one. He is Australia’s most accomplished player in the final third and the key to their chances.

Vidic doesn’t miss much in the air but he is vulnerable to pace. A brilliant organiser he will fancy himself to snuff out Cahill, but will not want to get drawn out of position.

Cahill is particularly dangerous from set-pieces, is good in the air and attacks the ball late. Vidic has his hands full but should be able to cope.

Nemanja Vidic: We can be confident, we must do the right things against Australia. They didn’t play great in the first game like us. Anything can happen in one game, we need to be focused.

Lucas Neill: We want Germany to go out and perform the way they did against us. Create lots of chances, be clinical and score lots of goals. Hopefully that brings Ghana's goal difference into the minuses and then we have to do our bit.

Prediction: All to play for with the Serbians just a little stronger.