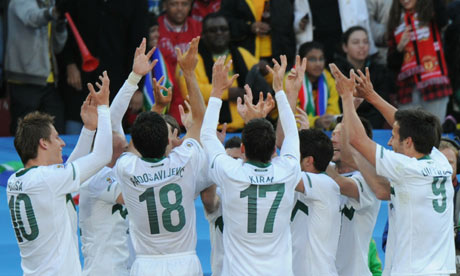 Slovenia players celebrate after midfielder Valter Birsa, left, curled in his wonder-strike during the 2-2 draw with the USA.

Everything you need to know about Slovenia's footballers was captured in the giddy moments following Valter Birsa's swirling wonder-strike against the USA on Friday. It was perhaps the goal of the World Cup so far and it put his team ahead in a vital match. But rather than embark on a solo glory charge he jogged to the touchline and waited for his teammates. Then, as a group, they danced, sang and pointed their fingertips to the sky, like first-timers at a rave.

Although Slovenia allowed a two-goal lead to slip in the second half, that draw, added to their gritty and slightly fortuitous win over Algeria in their opening game, has left them top of Group C. Now, a point against England will be enough for Matjaž Kek's side to reach the knockout stages for the first time — quite an achievement given that Slovenia, by far the smallest nation at in this year's World Cup, has existed for only 20 years.

Between now and then, hours of vacuous airtime chat will be devoted to Slovenia. Adjectives will become cliches, and the same lazy assumptions — that England will somehow find a way to win because, well, they're England – will be trotted out. But it would be dangerous to dismiss Slovenia as merely plucky underdogs. Yes, their population is a pinch over two million, and they have only 429 registered professional footballers: but they have played far better football than England so far.

Their secret, if there is one, is Kek's focus on team ethic over individual flair. Back in the days of the former Yugoslavia, Slovenians were considered the most industrious and stolid of the six republics and, correspondingly, they mocked the emotionality and inconsistency of their southern neighbours. These national characteristics are reflected in their football. They play a solid 4-4-2, strive for "efficiency" – Kek's favourite word — and are rarely flashy.

As Kek told World Soccer before the tournament: "The trademark of our national squad is the team itself. We don't have any big superstars."

His captain, Robert Koren, agrees: "We have a great spirit and when we celebrate a goal it is all the team together," he says. "There is a great atmosphere in the dressing room and that is why we are here."

Nobody embodies that spirit better than Birsa. As a teenager at Gorica he was hugely hyped as the next golden boy of the Slovenian game only for his career to flatline at Sochaux. Others might have drifted but the 23-year-old has recovered and flourished at Auxerre, and in the national team, after switching from forward to the right side of midfield.

"He was a prodigy in the Slovenian league but got a little lost when he went abroad," says Andrej Miljkovic, a journalist for the Slovenia daily Ekipa. "But now he has became a father and cemented his place in the side he is our best player."

Birsa is adept with both feet and likes to drift infield behind the front two, looking to either squeeze a pass to his strikers or shoot from distance. As the USA goalkeeper Tim Howard said: "Whoever the England keeper is, he'll have to watch out for Birsa. We had been talking about him for a week and were worried about his shooting. We didn't want to see him tee one up and of course he scored. But he is a gifted player. You can tell that by the passes he made."

Slovenia's highest profile player is probably the FC Koln striker Mile Novakovic, but there is no prospect of him labouring under a sense of entitlement. At 20 he left Ljubljana for the Austrian amateur side Klopienersee, playing "in a meadow" as he puts it. He worked his way up through Klagenfurt, Voitsberg and Mattersee before getting his break with LASK Linz. From there it was on to Bulgaria with Litex Lovech before finally, aged 27, he joined Koln in the second division of the Bundesliga.

Against Algeria he appeared nervy, but against the USA he was back to his best, tormenting his marker Oguchi Onyewu and taking his record to 16 goals in 38 international games.

But it is Kek, Slovenia's coach for the past two years, who has made the biggest impact. His credentials were questioned after a dog's dinner of a start, but since steering his side to second place in their World Cup qualifying group behind Slovakia and then squeezing past Russia in a play-off, he has become a national hero.

"At first people doubted his abilities to be national coach but they don't any more," says Miljkovic. "People also like the fact that he is modest and family orientated. He is a great cook and a wine expert – he has his own cellar – and used to be a jazz DJ. He's a lovely guy."

In the last fortnight, however, relations between Kek and the 15 print journalists covering Slovenia, hitherto courteous and co-operative, have become strained. The team wanted monkish isolation, the media wanted access to players — but in the build-up to the Algeria game the first team was closed off, with only reserve players put up for interview.

That has given press conferences an edge, but it was still a surprise to hear Kek announcesay after the USA game: "I have a message for Slovenian journalists: I hope that your attitude improves. If not, there may not be positive repercussions. I hope you take pride in Slovenia's performances so far and I hope you will come with us and have a beer."

According to Miljkovic, Kek was perhaps trying to deflect attention from his side's second-half performance. But being top of the group is still a great achievement, and Slovenia need only a draw against England to qualify.

Koren believes his team would be "stupid" to play for a draw. "If we do that from the start we are setting ourselves up for a fall and we might as go home now. We must prepare ourselves to get three points. We are really compact and strong physically and, in attack, we are always scoring goals. We are full of confidence and have been playing good football for two years with good results. We are a good, strong team and it will be really hard for England."

Asked if he feared any England players, Koren said: "Nobody." What about Wayne Rooney? "What has he done so far? Nothing."

Slovenia are a team in form, having won seven and drawn one of their last nine matches since losing 2-1 to England last September, after Rooney was awarded a controversial penalty and Jermain Defoe scored from a deflection. Slovenia believe Wednesday will be very different.

"Maybe people have underestimated us," says the defender Matej Mavric. "We believe we can go through, and we need to believe it until the end. It was a big thing, given that we have only two million people, when we qualified through a very difficult group. Now we do not want to stop.

"We want to keep going for as long as possible. Beating England would be the biggest achievement in any sport since we became an independent nation in 1991." Only the most blinkered England fan would dismiss their chances of doing it.