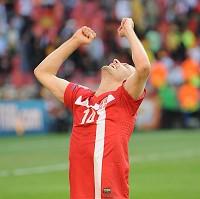 Milan Jovanovic and Vladimir Stojkovic teamed up to re-ignite Serbia's World Cup campaign with a 1-0 win over Germany.

Each of the three games in the group to date has seen a red card, and Klose will be suspended for Wednesday's final first round clash with Ghana in Johannesburg as Serbia take on Australia in Nelspruit.