France coach Laurent Blanc will drop all 23 World Cup players for his first match in charge next month as collective punishment for the team's embarrassing fiasco in South Africa. 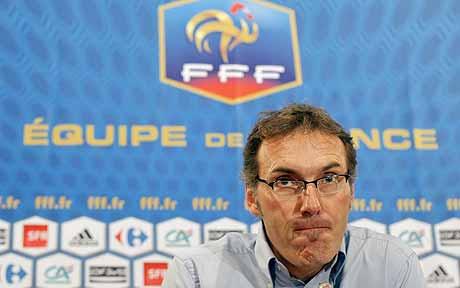 New broom: Laurent Blanc has laid down a marker in his first decision as French coach, suspending the entire World Cup squad for a friendly

The French federation said on Friday that it had granted Blanc permission to suspend the players for the friendly against Norway in Oslo on Aug 11.

France were eliminated in the group stage at the World Cup, failing to win a game. The players also refused to train as a protest after Chelsea striker Nicolas Anelka was sent home following an expletive-laced tirade at then coach Raymond Domenech.

Blanc refused to speak to reporters when he left the federation's headquarters on Friday.

France's disappointing performance in South Africa came after the team failed to win a game at the 2008 European Championship, also under Domenech.

The French team endured days of chaos at the World Cup after L'Equipe newspaper published a rant by Anelka aimed toward Domenech at half-time of a 2-0 loss against Mexico, prompting the French federation to send the striker home.

The next day, the entire squad refused to train in protest and captain Patrice Evra had a lively altercation with the team's fitness coach that was captured on television.

The events caused an outcry in France, with politicians criticising the players' attitude, legislators in parliament questioning the coach and even President Nicolas Sarkozy weighing in.

Outgoing federation president Jean-Pierre Escalettes has launched an investigation into the players' actions. The commission should deliver its conclusions to the federation by Aug 15.

Escalettes handed in his resignation earlier this month, and the federal council unanimously appointed Fernand Duchaussoy as caretaker president.

Duchaussoy said earlier this week it would be difficult for Franck Ribery and Karim Benzema to play for France after both players were issued preliminary charges for their alleged involvement in a sex scandal with an underage prostitute.

Duchaussoy added he would meet Domenech in the coming days to get an explanation for the players' poor results and attitude in South Africa.

"I am bitter about succeeding my friend Jean-Pierre Escalettes in a dark era for French football, which is going through a moral and sporting crisis," Duchaussoy said.

"My first responsibility will be to restore confidence in football, in the federation and in the people wearing our colours."