The FA have praised Howard Webb amid criticism of his performance in Sunday's stormy World Cup final, congratulating the English referee on a "well-handled" match. 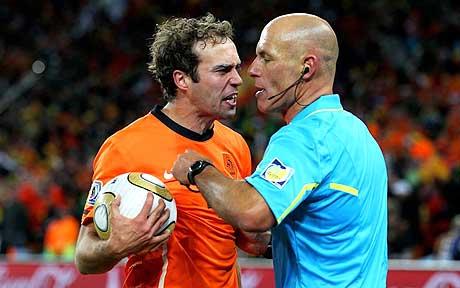 I beg to differ: angry Joris Mathijsen argues with referee Howard Webb after he feels the goal scored by Andres Iniesta of Spain was offside

The 39-year-old has been heavily criticised, not least by the Dutch media, after issuing 14 yellow cards during Spain's fractious 1-0 win - two of which led to the dismissal of Holland's Everton defender John Heitinga.

But people within the English game have been quick to leap to Webb's defence and the FA have now expressed their support for the Rotherham official, who arrived home with his assistants Darren Cann and Michael Mullarkey today.

Speaking to TheFA.com, Jonathan Hall, the FA's Director on the Professional Game Match Officials Board, said; "Firstly, we would like to congratulate Howard Webb, Mike Mullarkey and Darren Cann for a wonderful tournament and a very well-handled final in very difficult circumstances.

"Nothing should take away from Howard's achievement and it is hard to imagine many other officials being able to match his performance or handle such a fixture so well.

"I think what this does do is strengthen our resolve to support our excellent network of referees in England and it also shows the real value of the work being undertaken by the Respect programme domestically.

"We are all thoroughly proud of the fact FIFA chose to recognise Howard at the very peak of his profession."

Taylor is the most remembered of them after he awarded the first World Cup final penalty ever to Holland just a minute into the match against West Germany.

And David Elleray, Chairman of The FA's Referees' Committee, has hailed Webb for showing a similar sense of bravery.

He added: "Howard and his colleagues demonstrated why FIFA selected them as the best referee team in the 2010 World Cup and the FA is very proud that Howard, like Jack Taylor in 1974, showed impartiality, strength of character and a very high level of accuracy in the most important match in the world.

"The team were faced with a very challenging World Cup final and responded in a highly professional manner.

"Howard, Mike and Darren should look back on this tournament with a sense of pride in their performances, they are a huge credit to our profession and we are all looking forward to welcoming them home."