After the curtain was brought down on the 2010 World Cup by Andres Iniesta's extra time winner for Spain against Holland, Steve Wilson names his team of the tournament and his highs and lows from the tournament. 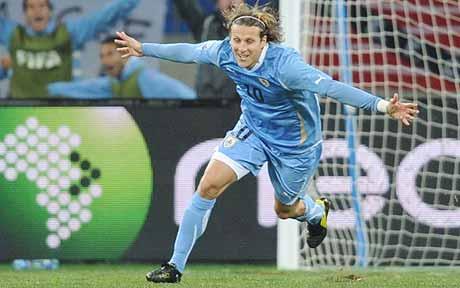 Player of the tournament:
Xavi or Andres Iniesta; Andres Iniesta or Xavi? The pair are so inextricably linked it is hard to separate them but for all Iniesta’s brilliance Xavi proved for the second tournament running that the man controlling the ball and guarding possession like it was his mother’s life is the key to any team that wants to play its way to success. A class apart.

Biggest disappointment:
The over-complicating of a simple game and tactical shackles put on gifted players. Portugal and Holland were guiltier than most but the age of the pragmatist is on us. But those who try to turn the game in to chess should note that it was the brilliance of Spain with a solid base in defence but ball playing players throughout the team, seeking to create rather than destroy, that ultimately overcame such tactics.

Best goal:
Maicon against North Korea. In a tournament lacking in great goals the sight of a forward thinking Brazilian fullback overlapping and then bending the ball in physics defying fashion was a glory to behold. And he meant it too - did the same thing against Portugal before the finals.

Worst game:
Japan v Paraguay. Two teams rather than celebrating a chance to reach the quarter-finals by drawing a less than intimidating opponent instead tried to grind their way to the next round. Had penalties written all over it from the first five minutes. Awful. And there were a few to chose from.

Best fans:
New Zealand. The genuine look of wild-eyed excitement and glee during the last ten minutes of their game with Italy, when they realised they were on for one of the shocks of the competition, was so refreshing and pure. Seeing hundreds of portly men swinging their shirts around their head and laughing and cheering with the same breath shouldn’t be a beautiful thing but was.

Unforgettable moment:
Diego Forlan’s penalty against South Africa. After all the petty moaning we learned what the vuvuzela was for. As the Uruguay forward was forced to wait an eternity to take the kick the sinister, moody sound rose to its greatest level of the tournament, the cameras focused on Forlan’s crazy eyes before he nervelessly stroked it home and the horns fell instantly silent. Pure theatre.

Rising star:
Mesut Ozil. Young, fearless and outrageously gifted, Ozil ran the show between midfield and attack in the embodiment of the modern playmaker and the new German philosophy. Intelligence and guile still gets the better of brutality in football.

Biggest managerial cock-up:
There has to be something that Fabio Capello has seen and doesn’t like about playing Steven Gerrard as a second striker off Wayne Rooney. I’d love to know what it is.