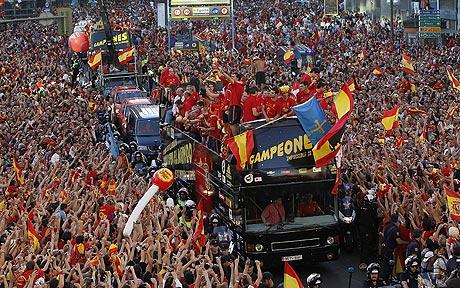 In temperatures soaring to almost 104F (40C) some people had waited for hours along Madrid's main avenues for a glimpse of the players who took Spain to World Cup victory for the first time ever.

The squad wore red T shirts with "world champions" emblazoned across their chests, waved flags and took photographs of the adoring fans in an emotional homecoming that saw many onlookers break down in tears of joy.

Giant inflatable red balls bounced across the heads in the crowd as the bus approached. To a collective "Ole! Ole! Ole!" from the fans the Spanish equivalent of the Red Arrows painted a trail of coloured smoke resembling the three stripes of the Spanish flag across the sky as the team turned into Spain's main avenue, the Castellana.

"I cried when the whistle blew last night and again when I saw the team bus," said Tania Garcia Minan, 29, a schoolteacher working in Madrid. "It really is a dream come true."

"This is the best day of my life," grinned 14-year-old Senay Ozkaya from Madrid, her face painted in the crimson and gold stripes of the Spanish flag.

"I am so proud of them and so proud to be Spanish."

Nearby on the Paseo de Recoletos three men whooped and furiously waved Spanish flags as the bus approached.

"We drove up from Valenica for this moment," said David Zaluez, an unemployed truck driver from the city on Spain's eastern Mediterranean coast. The three friends admitted that they had not been to bed since Andres Iniesta scored the winning goal.

"We partied all night, drove here and we will party another night before driving home," he laughed proudly. "This is helping us forget about our worries," he added revealing that he has been unemployed since the start of the economic crisis two years ago.

Earlier the team had been congratulated by Spain's King Juan Carlos II who had been unable to attend the final in Johannesburg on doctor's orders having recently undergone surgery.

"You are an example for new generations for your effort and the spirit you showed in overcoming the odds," the King said in the Royal Palace. "You made our best dreams come true."

Prime Minister Jose Luis Rodriquez Zapatero also met with the winners before they set off on their city tour which was due to finish at a specially erected stage on the banks of the river Manzanares.

The party, accompanied by live music, the deafening roar of vuvuzelas and the constant beeping of car horns, was expected to go on well into the night.