As Spain’s favourite son Rafa Nadal celebrated his country’s World Cup triumph and a nation welcomed their heroes home on Monday, Fernando Torres’s joy was tinged by fears of another long injury lay-off.

The striker faces a scan on his latest groin injury on Tuesday, amid worries he may have torn a muscle in the closing minutes of Sunday night’s 1-0 World Cup final win over Holland. 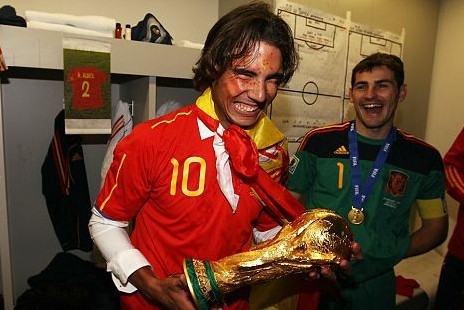 Cup of joy: Rafa Nadal and skipper Iker Casillas celebrate victory in the Spain dressing room (above) but the triumph was tinged with worry for Fernando Torres as he broke down with a groin injury (below)

Torres donned a Liverpool scarf in the dressing room, where Spain were joined by Wimbledon champion and world tennis No 1 Nadal, as they celebrated their extra-time victory. 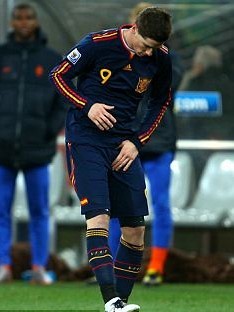 Despite the injury scare, a bid of up to £70million from Chelsea is still expected, though it would almost certainly be rejected.
As Liverpool waited for the verdict, knowing a tear would rule out Torres for the first month of the new season, they were heartened by further evidence that Steven Gerrard may stay.

Real Madrid transfer consultant Ernesto Bronzetti claimed Liverpool had put a £60m value on the England midfielder and that, combined with his age - 30 - had deterred president Florentino Perez from following up the Spanish side’s initial interest.