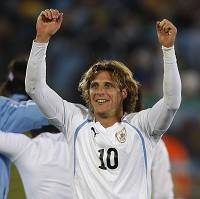 Diego Forlan has dedicated his FIFA Golden Ball award for the outstanding player at the World Cup to his Uruguay team-mates and vowed he will not let the praise go to his head.

The Atletico Madrid striker scored five goals, including a couple of stunners against South Africa and Germany, as Uruguay exceeded expectations to reach the semi-finals before losing the third-place play-off 3-2 to Germany.

"It's as great as it is unexpected," Forlan told FIFA.com. "I never even imagined something like this, nor did I have my sights set on it. As I'm a striker, I perhaps could have seen myself chasing the Golden Shoe, and in fact I came close. That would have been more normal."