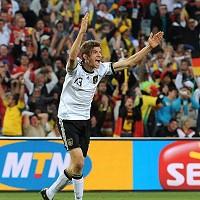 Thomas Muller admits he never believed he would win the Golden Shoe before the World Cup began.

The 20-year-old forward, who only made his international debut in March, scored five times in South Africa to clinch the award. David Villa, Wesley Sneijder and Diego Forlan also scored five goals, but the Bayern Munich man's three assists saw him edge out the trio.

"This is just incredible for a newcomer to the World Cup. If anyone had told me I'd end on eight scorer points, I'd have said they were kidding me," Muller said on Bayern's official website.