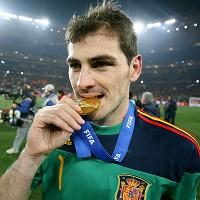 Spain captain Iker Casillas concedes it will take time for him and his team-mates to realise the magnitude of their World Cup victory after securing the title with a 1-0 win over Holland.

Spain, who have been one of the biggest underachievers in the game's history, capped a remarkable two years by adding the world title to their Euro 2008 triumph thanks to Andres Iniesta's extra-time strike.

"It's a historic moment for Spanish football," the Real Madrid goalkeeper said. "This achievement is something that we, the players, are still not aware of...what the significance really is. I think it's something we will only realise over time."