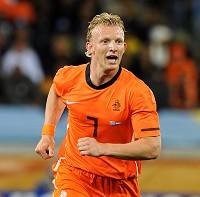 Webb brandished 14 yellow cards and one red - a record for a final - in a fiery encounter which saw Andres Iniesta's extra-time goal secure a 1-0 win for Spain.

The South Yorkshire official was booed by Dutch fans at the final whistle and Liverpool forward Kuyt said: "We are angry that we lost because we came so close. I know you cannot blame others, but the referee favoured Spain. We had many more yellow cards than we deserved. That ultimately cost us the cup."