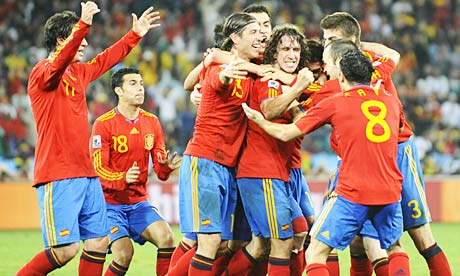 Spain have plenty to celebrate after years of underachievement in international championships.

By the end of tomorrow evening the list of World Cup winners will have expanded to eight and a new name will be attached to the trophy for the first time since France won at home in 1998. The sixth nation to achieve the honour was Argentina at home in 1978, the fifth was England at home in 1966, so Holland or Spain will not simply be joining an exclusive club in Johannesburg tomorrow – they will be bucking a trend by doing so on a different continent.

Whoever wins it will be a good story. No one would begrudge Holland the belated success they so richly deserved in the 1970s, even if their present style of play is nowhere near as aesthetically pleasing. Spain do appeal to the purists and, after decades of being the most reliably disappointing team in world football, they stand on the verge of becoming only the second country, after France in 2000, to hold both European and world crowns at the same time since the European Championships became a proper tournament.

The World Cup in South Africa has undoubtedly been a good story too. Although the facilities of the host country left a little to be desired, particularly in terms of transport and accessibility, the games themselves were often memorable. Perhaps there was a shortage of truly great matches, epic encounters between marvellous teams with twists to the plot and atmosphere you could feel from half the world away, but there was plenty of drama on offer and all manner of shocks, incidents and tales of the unexpected.

It was an entertaining tournament all the way through and jaw-dropping highlights that will rightly take their place in the World Cup memory bank, including the madcap last 10 minutes of Italy v Slovakia, the USA's last-minute winner against Algeria, the scarcely believable climax to the Ghana v Uruguay game (Fifa need to introduce a penalty goal award, and fast) and Germany's thrilling demolitions of England and Argentina.

Above all, what shone through with unmissable warmth in what was at times a chilly tournament was confirmation that the World Cup is still big. It matters. Football has plenty of other diversions and it has become fashionable in recent years to claim standards are higher and games more glamorous in the Champions League, which they may be. But the World Cup remains the ultimate goal. Players want to be in it, want to win it, are inconsolable when they go out of it. The stage is huge and so is the drama. Most elite players get a crack at the Champions League every year whereas Ghana and Uruguay, for example, instinctively knew that this was their single shot at glory.

The Champions League is the distillation of all that is best in league football but, as its name suggests, it is still league football. Tomorrow night's participants, as evidenced by their history, are playing in dreamland. The great thing about World Cups is that, even if your name is Diego Maradona or Johan Cruyff, shots at winning them tend to turn up about once in a lifetime.

If your name happens to be John Terry or Steven Gerrard, you might have to wait a little longer than that. Rumours in England of an alleged golden generation can now be quietly laid to rest in the World Cup equivalent of an unmarked grave. England wrote no history, made no impression, failed once again to get within touching distance of the final. So, it may be said, did Italy, France, Argentina and Brazil, although England can take only false comfort from being in exalted company. All of those teams have won the World Cup since 1966, three of them more than once, and France reached the final last time around.

England's record of not even reaching a European Championship final is particularly bleak considering that Denmark in 1992 and Greece in 2004 have won the competition and Portugal, Russia and Belgium have been runners-up. Now that Holland and Spain are punching their weight again, England stand alone among the so-called top-tier football nations, unmatched for underachievement. It is highly debatable whether England still deserve to be billed as a leading football nation. The only actual achievement was almost half a century ago and the Premier League that showcases our fondness for football to the world is full of foreigners and debt.

It is not straightforward to grade countries by leagues alone. Of tomorrow night's finalists Holland are a small nation with a minor league but exporting most of their leading players to other countries makes them adaptable. Spain are a fairly large country with an excellent league and, as Germany and Italy have found in the past, drawing on players who mostly play in the country of their birth promotes continuity and understanding.

Either way the bottom line is that Holland and Spain produce players. England do not, or not enough. English players are not exported all around the world – there are none to speak of in any of the top leagues, unless one is to count David Beckham's loan arrangements – and they form only a minority proportion, 38%, of the Premier League. A huge 77% of La Liga is Spanish. That is a greater percentage than the number of Germans who play in Germany (62%). They must be doing something very right in Spain: a successful league that is recognisably Spanish and a notable national side. That will still be the case whatever tomorrow night's result, because two consecutive finals achieved in some style speak loudly of success.

Spain have surrendered the title of most reliably disappointing team in world football. England, who never looked as happy and relaxed when they were in the World Cup as they did when they were out of it, may be stuck with it for some time.