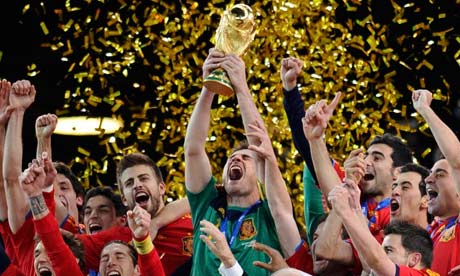 This World Cup ended the way the modern South Africa began 16 years ago: with Nelson Mandela its star. Possibly the final reward of Mandela's great political life was to pay a brief visit to the Johannesburg cauldron where Spain lifted the trophy for the first time with a goal in the 116th minute of a sometimes brutal encounter with Holland.

A tournament that was all about harmony produced an acrimonious finish as the Dutch attempted to stop, by brute force, Spain becoming the game's eighth world champions. Howard Webb, the English referee, risked repetitive strain injury showing 14 yellow cards, a record for a World Cup final. He also sent off Holland's John Heitinga as the Dutch suspended their artistic heritage.

With their poise and kaleidoscopic passing Spain represented football in its ideal state. Self-expression conquered pragmatism as fireworks over Johannesburg marked the end of Africa's first World Cup. "It was a very difficult game but we have some fantastic players who knew how to respond to the problems," said Vicente del Bosque, the Spanish coach. "We owe this to a great group of players."

An all-European showdown tore at the nerves of two great footballing cultures as the contest threatened to run to a penalty shoot-out before Barcelona's Andrés Iniesta closed the deal with a right-foot shot four minutes from the end of extra time.

In Spain, where many Basques and Catalans disown the national team, an estimated 300,000 fans rejoiced in Madrid's city centre as a side packed with Barcelona players added the world crown to the European championship they won in Vienna two years ago.

This will go down as the blood and thunder final at the end of a competition that emphasised South Africa's talent for integration and reconciliation. At times it was closer to white South Africa's favourite sport, rugby.

Within walking distance of his old family home at 8115 Orlando West, Soweto, Mandela took a short golf-cart ride across the pitch at the Soccer City stadium as if trying to draw one last epiphany from South Africa's transformation.

He was shrewd not to stay for the football. Two teams renowned for their verve turned the first half into a test of machismo, in which Holland were the worst offenders. English football managed to sneak a man onto the field but this was not a good night for Rotherham's Webb. At the high point of his five-year sabbatical from South Yorkshire police, he faced the match official's dilemma of whether to send a player off in a showpiece game as a succession of Dutchmen – Mark van Bommel especially – stretched his authority with persistent and bone-juddering fouls.

Spain responded with a few choice lunges of their own. With eight players booked in little over an hour Soccer City was hardly a festival of the finer arts. The vuvuzela was reassigned from a tool of support to an instrument of derision as the 84,490 crowd grew frustrated with the constant interruptions. Moments before the teams filed up the tunnel a pitch invader came within inches of swiping the World Cup trophy off its plinth but was tackled by security guards just in time. It was an isolated show of anti-World Cup sentiment at a tournament that left many European visitors ashamed of their preconceptions about crime and social disorder.

"South Africans are very proud of what the country has achieved and everyone in South Africa is walking tall," said Danny Jordaan, head of the World Cup organising committee. "For years, many South Africans have been told that they are inferior, that they are not good enough. The nation has crossed a huge psychological barrier."

Private security companies said violent crime in parts of Johannesburg fell 60%. Some believe criminal gangs took a kind of forced sabbatical to avoid the 40,000 extra police hired for the tournament.

The justice department reported that 194 crimes had been brought before the World Cup courts. After Spain's win Fifa might be wise to set up a footballing equivalent to hear the explanations of those players who were less concerned with beauty than belligerence.