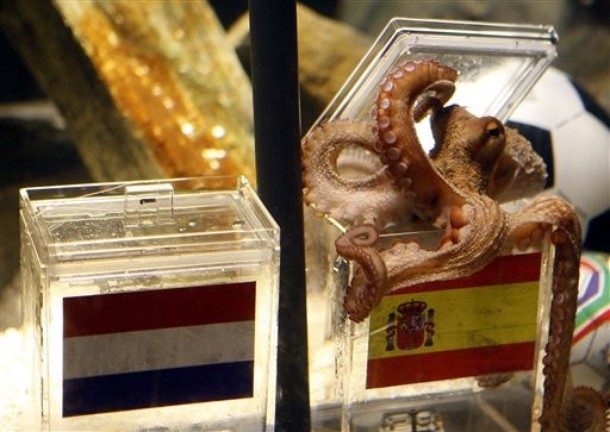 Paul the psychic octopus maintained his flawless performance in the World Cup by correctly predicting that Spain's victory over Holland in the final.

Punters gambling on the mystic mollusc's predictions have won up to half a million pounds during the month-long tournament, according to bookmakers William Hill.

Paul, who was born in Weymouth in 2006, has become the closest thing to an English World Cup success after accurately foretelling match results throughout the tournament.

The octopus, who now resides in Germany's Oberhausen Sea Life aquarium, correctly predicted the outcome of all six matches involving his adopted homeland by choosing to eat a mussel from boxes emblazoned with the flags of the German team and its rivals.

After his prediction that Germany would be defeated by Spain came to pass, some angry fans called for him to be thrown in a shark tank. But he won support from Spanish fans who pledged to protect him, despite their country's fondness for calamari.

Paul has become an internet star with videos of his predictions posted on YouTube attracting hundreds of thousands of hits.

His rival Mani had, according to his owner – fortune teller M Muniyappan, predicted the last five games of the tournament correctly.