We expected a classic clash of philosophies, but Holland and Spain's negativity was not a fitting end to a World Cup 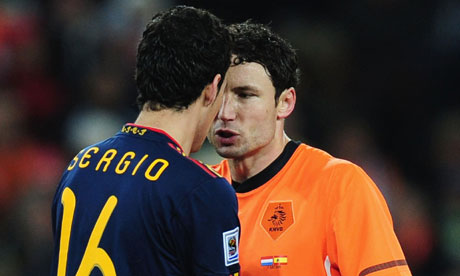 The ugliness of the final was summed up by Holland's Mark van Bommel, who again somehow escaped a red card.

No more all-European finals, thank you very much. The one four years ago that ended with Zinedine Zidane's head-butt and a penalty shoot-out was bad enough. But no one seriously expected a classic in Berlin that day. Last night's match was supposed to be a fascinating contest of stylistic nuances, a collision of rival philosophies featuring some of the finest attacking talents in the modern game. But as we had to wait until deep in extra time for Andrés Iniesta's goal, 84,000 people in the stadium and a reputed 700 million television spectators were left wondering when the football was going to start.

Didn't someone tell the players that Nelson Mandela was in the house, never mind Shakira, Charlize Theron and 16 heads of state? Football is about 22 men in search of a result, nothing more and nothing less, but a little entertainment never goes amiss.

The previous night's third-place play-off had produced a match far worthier to be called a final. Germany and Uruguay, in a fixture popularly supposed to exist only to make a bit more money for the organisers, both went for victory from start to finish in what was very probably the best of the tournament's 64 games. There was high quality and unremitting excitement, and there were goals – plus that heart-stopping effort from Diego Forlán that rattled the German crossbar with the last kick of the match.

Oh, for anything half as exciting to warm the spectators on a winter's night in a spectacular arena set amid the ziggurats of the disused coal mines on the high plain between Johannesburg and Soweto. A tournament that began with the sizzle of Siphiwe Tshabalala's goal for Bafana Bafana against Mexico seemed to have had the vivacity drained out of it by a surfeit of Old World tactical sophistication.

It would be amusing to report that the match started with a long period of Dutch possession, in which the Spanish were reduced to chasing shadowswhile trying to get a touch on the ball. Inevitably, however, the natural order asserted itself from the start, Spain teasing and testing the Holland defence while the men in orange waited for the mistake that might allow them to spring forward.

Just as inevitably, there was a lot of unattractive caginess from both sides, a general nervousness making itself clear in inaccurate distribution and regular fouls from players intent on denying space to their opponents. By the time the match entered its second quarter Howard Webb had issued yellow cards to Robin van Persie, Carles Puyol, Mark van Bommel and Sergio Ramos, probably hoping to keep the temperature down. But when Nigel de Jong planted his boot squarely in Xabi Alonso's chest in the 28th minute, the Dutch midfielder was lucky not to see a card of a deeper shade.

Van Bommel, who had tripped Puyol and brought down Xavi after his caution, went over to have a word with Webb as the players and officials left the pitch at half-time, and it was tempting to wonder if he was asking how many more offences he was allowed to commit before receiving the ultimate sanction. That was the level to which the match had descended.

Long before the interval the vuvuzelas had virtually fallen silent. A couple of minutes before the interval, a Mexican wave broke out – perhaps in an attempt, or so one would like to think, to evoke the spirit of the Azteca stadium in the finals of 1970 and 1986, and a sense of drama and adventure sadly lacking from this encounter.

The tedium of the first period was relieved by a single significant chance for each side, Maarten Stekelenburg brilliantly parrying Ramos's header in the fifth minute and Iker Casillas responding 40 minutes later with a sprawling stop to deny Arjen Robben. But the tenor of the match was more accurately expressed when Pedro Rodríguez attempted to drive through the Dutch rearguard only to be surrounded by five orange shirts.

Little changed in the minutes after the interval there were boos as the yellow cards mounted, Giovanni van Bronckhorst, John Heitinga and Joan Capdevila being the next to earn Webb's disapproval. You had to feel sorry for the Englishman, who had probably hoped, on such a gala occasion, to be able to referee the match with a light touch.

Even the harshest critic would admit that Xavi, Robben, Iniesta, Wesley Sneijder, David Villa and Van Persie were doing their best to break the deadlock, but systems were strangling the match – particularly the system of defence devised by Bert van Marwijk, with two uncompromisingly destructive midfield players in front of the four-man defence. Even there it was possible to admire, in a detached kind of way, the discipline and intensity with which the Dutch defenders flew into their interceptions – as, to be fair, did their Spanish counterparts at the other end.

Defending well is as much a part of the game as scoring goals, but if ever there was a final to lend credibility to the concept of anti-football, this was it. Goodness knows what the audiences in front of the big screens in Madrid and Amsterdam, places were they expect something different, were making of it. The players of England, France and Italy, who left the tournament in disrepute and humiliation, must have been watching on their holiday islands and having a good giggle.