Home - News
Jurgen the German was FA's choice to replace Capello - Exclusive
11/07/2010  by Mirrorfootball
Text size: A A A 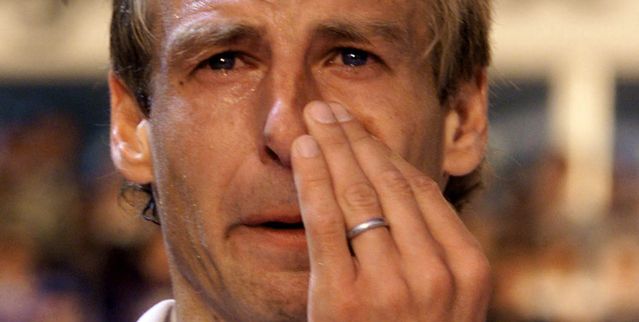 Jurgen Klinsmann was the shock appointment under consideration if the FA had sacked Fabio Capello in the wake of England’s World Cup disaster.

For public consumption Club England announced after their review that ­Capello was the man to take England forward and had received their unanimous backing.

But Sunday Mirror sport can reveal that within the 11 man FA board of directors – the ultimate power-brokers in running English football’s governing body – there was influential support for ­Klinsmann.

Capello clung onto his job by default.

Sir Dave Richards, ­chairman of the Club ­England board, had removed the review clause from the Italian’s original contract believing after a successful World Cup England would be in danger of losing the Italian to the predatory Inter Milan.

Instead of insisting that Capello would be reviewed after the finals, Club ­England made an expensive mistake by altering his contract ­before a ball was kicked.

That meant that England would have to settle ­Capello’s contract to dismiss him in the wake of England’s pitiful campaign in South Africa. They couldn’t do it.

Some of the more astute men inside the FA had ­spotted Klinsmann’s role in the rebuilding of the ­Germany team.

He was their national coach between 2004 and 2006 and led a young, ­developing side to third at the finals on home soil.

More importantly, he had shown the vision required to offer a way forward for a nation that could its national team getting old and ­withering away.

After a disastrous performance at Euro 2004, Klinsmann recognised the Germany team needed verve, energy, youth and the confidence to play exciting football.

At the time he was heavily criticised for his commitment to youth.

Uli Hoeness, at the time the Bayern Munich general ­manager, said: “I believe, like the rest of the country, that the national team is a ­catastrophe.”

Their third-placed finish ­silenced his critics.

And Michael Ballack, one of the senior stars Klinsmann was happy to standy by in his rebuilding programme, ­revealed: “I’ve rarely had a coach who is so incredibly positive and who can motivate people to such a degree.”

The England job is not ­available this summer, but Klinsmann, who lives at ­Newport Beach in the USA, could still be in the frame for the job if Capello either fails to deliver results or fails to ­address growing discontentment among his squad.

It’s ironic that the thrashing inflicted by Germany reflected so badly on Capello’s class of 2010. The Germany FA recognised that Klinsmann had been the most important architect in laying the foundations for that success.

That Germany team had an average age of 24.

Twelve months earlier the Germany Under-21 team had thrashed their English ­counterparts 4-0 to become European champions. As the Germany team evolves the word about Jurgen’s football gospel will spread.

He’s already had talks with the US federation but failed to reach agreement.

Others are likely to come knocking for the man who had the vision to inspire the ­German renaissance, but could not succeed with Bayern ­Munich.

Some managers prove to be great at club level. Others deliver on the ­international stage. That might just prove to be the difference between Capello and Klinsmann.