Home - News
World Cup final: Howard Webb given taster of pressure that awaits him for Holland v Spain
11/07/2010  by Telegraph.co.uk
Text size: A A A 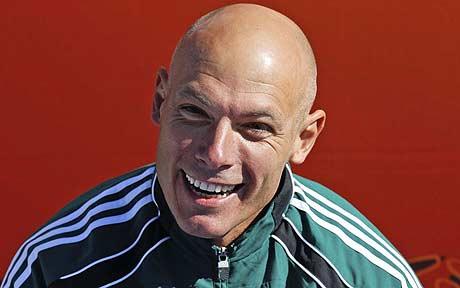 If ever this most decent and grounded of Englishmen needed a freakish preview of the unreal pressure that will be heaped upon him in Soccer City on Sunday night, he received it here at a Pretoria high school where an audience with the World Cup final referee prompted perhaps the most surreal scenes of the entire tournament.

Some 300 media folk stood religiously beside a football pitch with dozens of cameras trained on a middle aged bloke sitting down and going through stretching exercises.

Then, with guards in tow, he was ushered gravely forward for his official interview, with a taped-off security area around the top table there presumably to prevent hordes of crazed, shrieking Yorkshire refereeing groupies throwing themselves at their shaven-headed hero.

It was all quite absurd, in keeping with the mad gigantism of the entire circus, and you could tell by the occasional grin that the 38 year-old secretly must have recognised it too. “We’re more comfortable on the field doing our job,” he was forced to concede.

But Howard was here to play Fifa’s perfect diplomat and, if he does his other job as excellently on Sunday night, he won’t go far wrong. He praised his assistants, Darren Cann and Mike Mullarkey, his fellow refs, his family, the organisers, the police, his South African hosts.

Good grief, we thought he might even thank England for getting knocked out so pitifully to allow him a run at the final but, naturally, he was the model of honour, stressing his disappointment at their early exit.

But he could be forgiven. He came over as a thoroughly charming, good egg.

The first international query was whether it was true (as his wife Kay had mischievously punted) that he couldn’t control his three children, let alone a World Cup final.

“l’ll speak to her when I return,” smiled Webb, before assuring the world “she was only joking…my children are well behaved.” And did his dad, Billy, who had introduced him to refereeing two decades ago, really run out into the street in Rotherham blowing a vuvuzela on hearing news of his appointment? “I just hope he doesn’t blow it when I get back,” muttered his boy.

Was he Pierluigi Collina in disguise? “You don’t have to be bald to be a successful referee — it’s just by chance it worked out that way for me.

Given a choice, I’d probably have chosen lovely flowing locks, but God wasn’t so kind!” said Webb. “But Collina was a wonderful role model.” Good answer.

Everybody laughed. Even Jack Taylor, the last Englishman to referee the World Cup final 36 years ago, reckoned today that Webb’s calm, natural authority actually reminded him of Collina, a man who always did look as if he had just escaped from an Edvard Munch canvas.

“I believe Howard’s the best referee this country has ever produced,” was the 80 year-old’s effusive tribute. The Premier League has flown Taylor out for the final and on Saturday as Webb went to get a feel for what may await inside Soccer City’s calabash, he met up with his old refereeing hero who, he said, “was a really big supporter of mine in my early career”.

What pressure. “Yes, what a big decision,” reflected Webb. “But our job is to take those big decisions — sometimes courageous ones — at any time. That’s our duty; to stand up to the plate and make the correct decisions.

“I suppose the perfect game for me would be where everybody ends up talking about the excellent game, the players’ skill and no-one talks about the officials.”

Amid the barking hype of the 2010 World Cup, Webb should be so lucky; the world should wish our whistling superstar all the very best of British.